KeiVarae Russell grateful to be back with Notre Dame 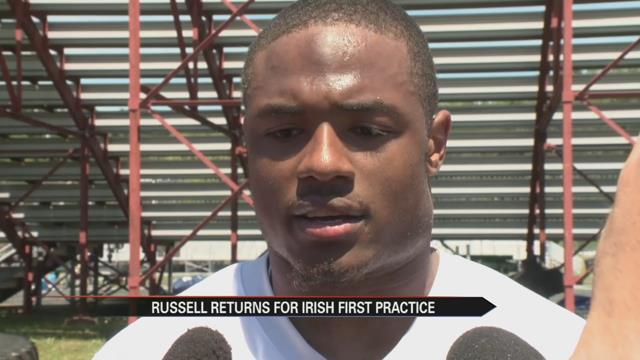 At the Notre Dame Football team's first day of training camp in Culver, Indiana, KeiVarae Russell spoke about what it's like to be back. Last year he was part of an academic dishonesty investigation involving five players.

"When I got suspended I knew that I didn't really have a chance to show what I've done in the 'bend don't break' defense that we had my freshman and sophomore year. So I had to come back and really show what these guys can do. And I want to be a champion. So I want to win a ring," Russell said.

Russell's champion spirit and skills were on display Friday afternoon at the Irish training camp at the Culver Academies on Lake Maxincuckee.

Russell says sitting out made him grateful to be back.

"I haven't shown enough! Like I said I really believe I could be the best corner in the country," said Russell.

That statement is something Head Coach Brian Kelly agrees with.

"You can see a smile on his face so you feel for him and so happy that he's able to get past all the things that have been in front of him," Coach Kelly said.

"He's always chirping at somebody! And it's fun. For me the guys got to feed off that," said Schmidt.

Russell says while sitting out last season he was filled with a lot of grief but he took the time to train with some coaches off season to better himself.