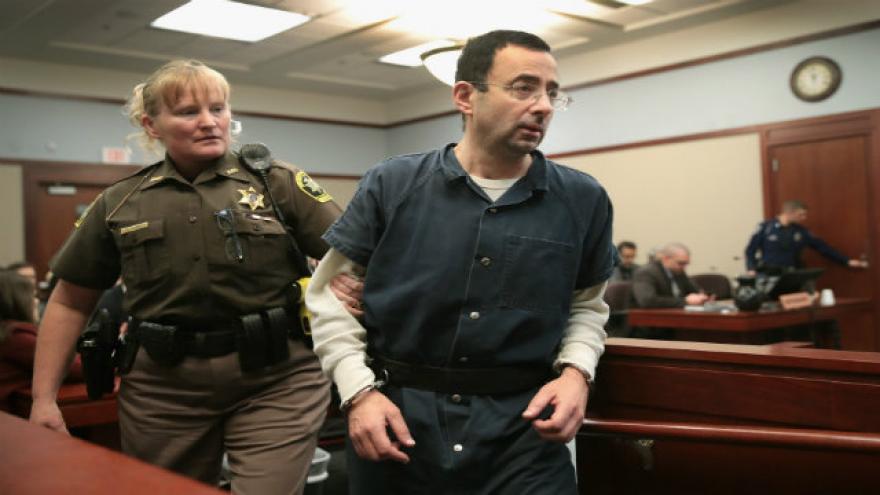 By Eric Levenson and Holly Yan

(CNN) -- Jessica Thomashow said she was "excited" to first meet Larry Nassar. She was 9 years old, suffering from a rib misplacement, when the staff at Twistars gymnastics club in Michigan told her about the doctor renowned for treating young gymnasts.

"This was the first time I heard of Larry Nassar and his reputation," the former gymnast said in court Wednesday.

"I remember my coaches telling me to go see him, and I was actually quite excited. Then I went into the back room, and that's when everything changed. I was alone with him. He had me lie down on the table, and he sexually assaulted me."

Thomashow, 17, was the first of at least 65 young women expected to speak at Nassar's latest sentencing hearing, his third in recent months.

The former team doctor for USA Gymnastics and at Michigan State University has pleaded guilty to three counts of criminal sexual conduct in Eaton County, where Twistars is located.

Nassar and legendary gymnastics coach John Geddert had worked together at Twistars. Geddert, who coached the gold medal-winning women's gymnastics team at the 2012 Olympics, was suspended by USA Gymnastics last week.

The Eaton County Circuit Court has set aside three days for victim impact statements, and the hearing is expected to go into next week, Eaton County Court Administrator Beryl Frenger said. The hearing continues Friday, when statements from about 35 survivors are expected.

The testimonies come after more than 150 young women, including Thomashow, gave gut-wrenching accounts of Nassar's abuse in nearby Ingham County. There, Nassar pleaded guilty to seven counts of criminal sexual conduct and was sentenced last week to 40 to 175 years in prison.

He has also pleaded guilty to child pornography charges in federal court and was sentenced in December to 60 years in prison.

The Eaton County hearing comes amid a widening inquiry into how the institutions in charge failed to stop the abuse for so long.

Schuette said that holding this sentencing hearing in Eaton County will "ensure that every voice of every survivor" is heard.

Fallout at MSU and other institutions

For more than two decades, Nassar was a respected doctor who worked closely with the US Olympic women's gymnastics teams, young athletes at MSU and girls at Twistars gymnastics club.

But as part of a plea deal, Nassar admitted in court to abusing young women under the guise of providing medical treatment.

Several women said they reported his abuse to coaches, trainers and adults at USA Gymnastics and Michigan State. They said their concerns were ignored or improperly investigated, and his abuse continued unabated.

That finally changed in 2016 when The Indianapolis Star spoke to Rachael Denhollander and published an article documenting Nassar's abuse. More than 150 women have since come forward with similar stories, including Olympic gold medalists Aly Raisman, Simone Biles, McKayla Maroney and Jordyn Wieber.

Since then, Nassar has faced a series of criminal charges and civil lawsuits and will spend the rest of his life in prison.

USA Gymnastics and Michigan State have denied wrongdoing, and USA Gymnastics said it reported the allegations to authorities when it learned about the sexual abuse.

The university maintains that no official there believed Nassar committed sexual abuse until newspapers began reporting on the allegations in the summer of 2016.

Nassar's crimes have had significant repercussions at Michigan State, USA Gymnastics, the US Olympic Committee and Twistars. The university's president resigned and the athletic director retired, and the USOC's chief executive has called on all USA Gymnastics board members to resign.