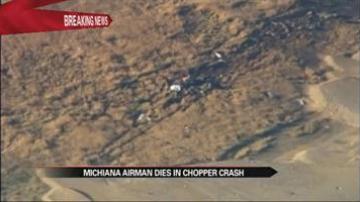 Four US Airmen were killed Tuesday evening in a helicopter crash on the Norfolk Coast of England. One of the men on board was from Rolling Prairie, Indiana.

The HH-60G Pave Hawk helicopter crashed at the north end of East Bank on the Norfolk Wildlife Trust Cley Marshes Nature Reserve at around 7 p.m.

Stover and Ruane were the pilots, and Mathews and Ponce were the special mission aviators, according the an official release.

The men were part of the 48th Fighter Wing stationed at the Royal Air Force base in Lakenheath England.

"We continue to think of the loved ones who are experiencing such a tragic, sudden loss," said Col. Kyle Robinson, 48th Fighter Wing commander. "The Liberty Wing feels as though it has lost members of its family, and we stand by to support one another and these Airmen's families during this difficult time."

The accident is under investigation.