Man jailed in Venezuela for 2 years returns to US 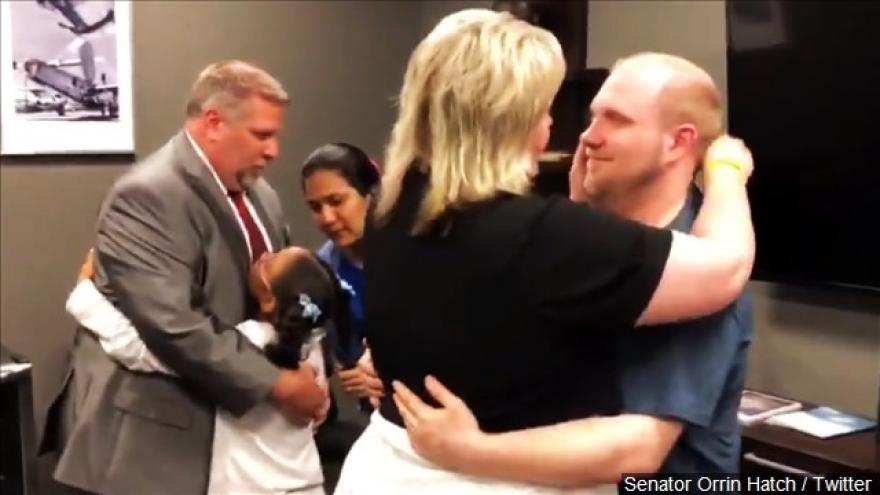 WASHINGTON (AP) — Joshua Holt, who traveled to Venezuela from Utah in 2016 to marry a Spanish-speaking Mormon woman but soon found himself jailed and later branded the CIA's top spy in Latin America, has been set free by the anti-American Maduro government.

He says he was "overwhelmed with gratitude."

Holt and his wife, Thamara Caleno, arrived Saturday evening at Washington Dulles International Airport for a tearful reunion with his parents, Laurie and Jason Holt. A few hours later President Donald Trump welcomed them to the White House.

"Those two years, they were a said an emotional Holt, sitting next to Trump in the Oval Office. "Not really the great vacation that I was looking for ... I'm just so grateful for what you guys have done."

To Holt, Trump said: "You've gone through a lot. More than most people could endure."

The Utah man's mother, Laurie Holt, thanked Trump and the lawmakers for her son's safe return, adding: "I also want to say thank you to President Maduro for releasing Josh and letting him to come home."

Their release came one day after Sen. Bob Corker, R-Tenn., held a surprise meeting in Caracas with Venezuelan President Nicolas Maduro, who the Trump administration says runs a "dictatorship" and just won re-election in a "sham" vote.

Trump, in a tweet, described Holt as a "hostage." The U.S. contended Holt was held on trumped up charges.

Months of secret, backchannel talks between an aide to Corker, chairman of the Senate Foreign Relations Committee, and close allies of Maduro preceded their return. Yet Holt's release had seemed unlikely even a week ago.

The White House learned from Corker on Friday of Holt's impending release, according to a U.S. official who has closely followed Holt's plight and spoke on condition of anonymity to describe the private talks.

Holt and his wife were reunited at the Caracas airport with her daughter from a previous relationship, and all three boarded a chartered flight to Washington. "We are on our way home," Corker tweeted.

When he departed the Caracas airport earlier, Holt told The Associated Press that the ordeal had left him "exhausted."

Venezuela's communications minister, Jorge Rodriguez, said their release was a goodwill gesture that followed months of dialogue between the Maduro government and U.S. lawmakers.

"We're praying that this type of gesture ... will allow us to strengthen what we've always sought: dialogue, harmony, respect for our independence and respect for our sovereignty," he said. 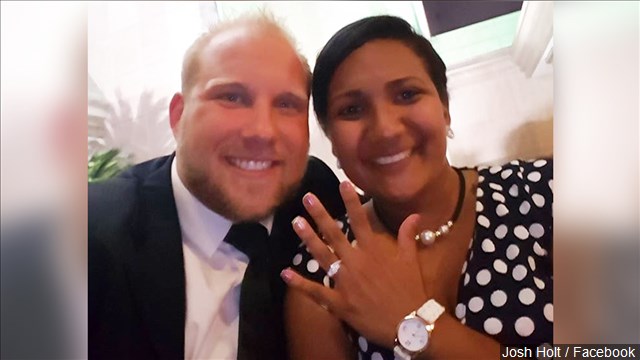 Joshua Holt and his wife Thamara. Holt was accused of stockpiling weapons and jailed in a Caracas prison for two years. Josh Holt / Facebook

Holt, now 26, set out for the South American country in June 2016 to marry a woman he met online while looking for Spanish-speaking Mormons who could help him improve his Spanish. He had planned to spend several months in Caracas that summer with his new wife and her two daughters, to secure their visas so they could move with him to the U.S.

Instead, the couple was arrested that June 30 at her family's apartment in a government housing complex on the outskirts of Caracas. Authorities accused him of stockpiling an assault rifle and grenades, and suggested that his case was linked to other unspecified U.S. attempts to undermine Maduro's rule amid deep economic and political turbulence.

They were held in a notorious Caracas prison, run by the secret police, that also is home to dozens of top Maduro opponents jailed during the past few years of political unrest in the country. Their trial was set to begin this month after repeated delays that led the Trump administration to question the motives for his detention.

Until Trump's tweet on Saturday, the U.S. had stopped short of publicly calling Holt a "hostage."

Holt's release looked unlikely a week ago, when he appeared in a clandestinely shot video railing against the Maduro government and saying his life was threatened in a prison riot. In retaliation, socialist party boss Diosdado Cabello, a powerful Maduro ally, said on state television that Holt was the CIA's top spy in Latin America.

Sen. Marco Rubio, R-Fla., spoke to Trump at length Friday night and later said the couple's release "will in no way change U.S. policy toward the dictatorship in Venezuela."

The White House press secretary issued a statement to that point Saturday night, saying policy was not changing even while thanking the government for releasing the Holts. The statement also called the recent elections "illegitimate" and urged the release of all political prisoners.

The Trump administration has threatened crippling oil sanctions on Venezuela for Maduro's decision to go forward with the presidential election last week.

The U.S. government at first avoided ratcheting up public pressure on Venezuela in light of their already strained relations, but eventually raised Holt's case with the highest levels of the Venezuelan government and decried his treatment in prison.

Corker was seen live on state TV on Friday shaking hands with Maduro and being greeted by first lady Cilia Flores as he entered the presidential palace. Corker left an hour later; neither the senator nor the president made any statements.

Laurie Holt worked feverishly to bring attention to her son's incarceration, hosting rallies, fundraisers and doing media interviews. She said her son has suffered numerous health problems in jail, including kidney stones and respiratory problems. He was depressed and at one point lost so much weight that he dropped several pant sizes, she said.

In their statement, the Holt family said, "We thank you for your collaboration during this time of anguish. We ask that you allow us to meet with our son and his wife before giving any interviews and statements. We are grateful to all who participated in this miracle."