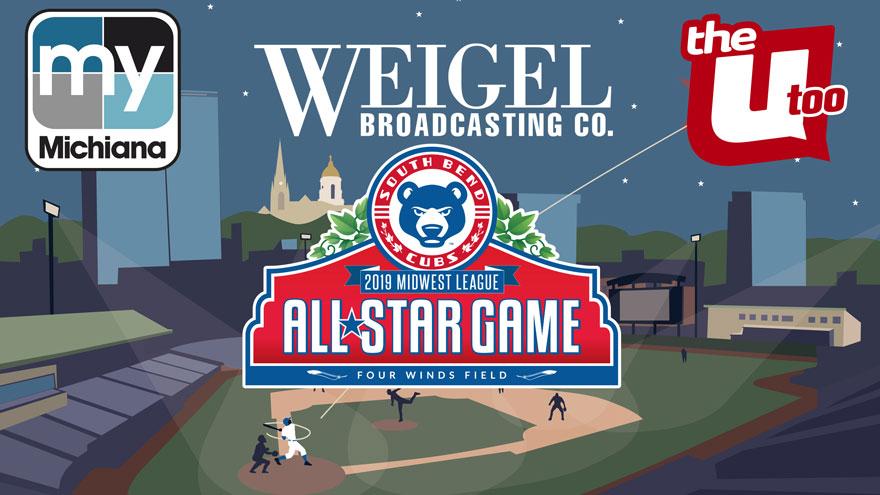 The 55th Midwest League All Star Game will air on My Michiana, WMYS, on June 18. It will also air on WCIU, The U Too, in Chicago.

MyMichiana will also air the Home Run Derby on June 17.

“When the Major League players of tomorrow hit the field for the 2019 Midwest All-Star game in South Bend, the game will be televised in America’s third largest city,” Chairman and Owner of the South Bend Cubs Andrew T. Berlin said. “That’s never been done before.  And televising to a Chicago audience is just one of the ways we’re setting a new standard for how to host the week-long All-Star event.  Our own South Bend Cubs production team is producing the broadcast. And we’re going to put on a show that makes this city proud.”

“It’s our culture to change the norm and exceed expectations,” South Bend Cubs Vice President and General Manager Nick Brown said. “That mentality is not just limited to the fans attending the All-Star festivities, but to those watching at home. We have challenged our in-house production team to deliver an award-winning caliber broadcast and we look forward to them exceeding those expectations with their expertise.”

South Bend Cubs Broadcaster Darin Pritchett will have the TV call on The U Too and My Michiana.

To watch the All-Star Game and Home Run Derby on

“Weigel Broadcasting is pleased to be the television partner for the 2019 Midwest League All-Star Game.” Senior Vice-President of Operations for Weigel Broadcasting Co. Steve Farber added. “Viewers will be able to catch the All-Star game in South Bend on WMYS, My Michiana, and in Chicago on WCIU, The U Too.”

“The South Bend franchise has for the past 31 seasons been a leader in Minor League Baseball from the construction of one of the earliest state of the art facilities, maintaining it to keep its uniqueness and now in season 32 televising the All-Star Game in an unprecedented fashion,” Midwest League President Dick Nussbaum said. “Another reason to never under estimate Andrew Berlin and his wonderful team.”

Tickets for both events are available at the South Bend Cubs Box Office, by phone at (574) 235-9988, or online at SouthBendCubs.com.