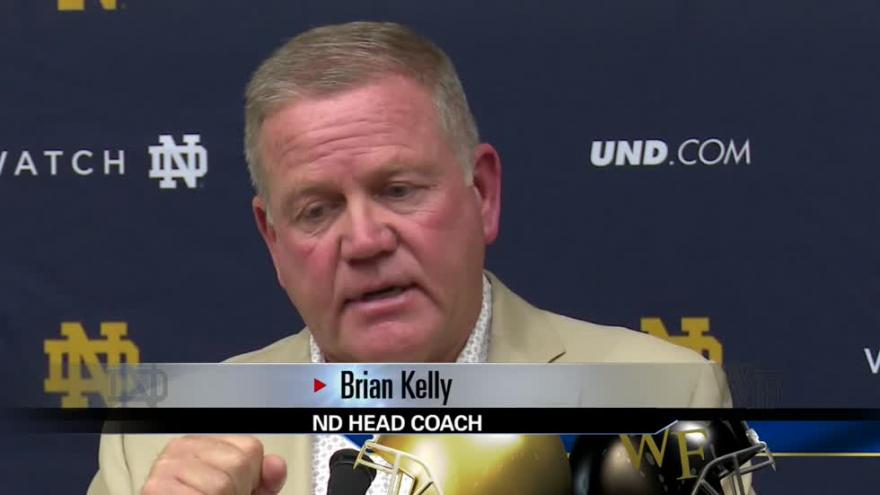 The Notre Dame Club of Central North Carolina held a pep rally Friday for Notre Dame fans who want to celebrate the Irish coming to town. They will play Wake Forest Saturday at noon.

It's the first road test of the season for the Irish. Head Coach Brian Kelly wants to make sure everything is clicking, especially offensively.

"We've been fairly balanced. We haven't attacked at all times, and we haven't been proficient at scoring touchdowns. We've got to keep attacking and we've got to score touchdowns. That's been lacking," said Coach Kelly.

Coach Kelly declined to say whether Brandon Wimbush or Ian Book would be starting Saturday.

Players said they're eager to play on the road this week, especially Alohi Gilman, who missed the entire season last year due to transfer rules.

"When I figured out I wasn't going to play, it was tough coming to practice every day and finding the motivation to work towards something that's so prolonged. I don't take it for granted at all. I wouldn't take it back for anything. I became a better person, first and foremost and it made me a better player," Gilman said.

Gilman's impact has been immediate.

He's become one of the team's leaders in tackles - and providing a confidence that has mirrored the rest of the safety play in the first few weeks.

"Alohi brings a lot of energy to the game and a physical mentality. Alohi and I got really close last year. He's one of my guys," Nick Coleman said.

Gilman's journey goes from Hawaii to the Naval Academy to South Bend.

His story will be featured on ABC57 Saturday Kickoff at 10 a.m.