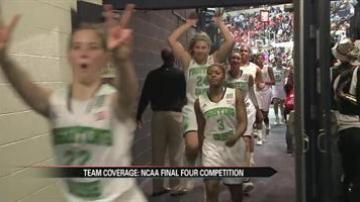 NASHVILLE, Tenn. – Notre Dame beat Maryland in the Final Four Sunday night. The final score was 87-61. Fighting Irish Head Coach Muffet McGraw said the team is happy to be going to the championship, but she stressed that they are on a mission.

ABC 57 was there as the team left the gym at the Bridgestone Arena.

You could see the players’ excitement through a number of high fives and large smiles.

A big part of the win over Maryland was senior guard Kayla McBride.

“Wow, she got off to a great start offensively and was key to calm everybody down and then we were able to do a good job on the boards,” said McGraw.

McBride had 19 points in the first half and ended the night with 28.

“I credit my teammates for finding me the ball, but I was in a flow and it’s the Final Four as a senior, I’m trying to leave it all on the floor. I was making open shots. I was feeling the crowd, just feeling the environment. It was defiantly something I’ll remember,” said McBride.

Another huge factor for the Irish was rebounding.

McGraw said in the locker room after the game this was the best defensive game her team has played all year.