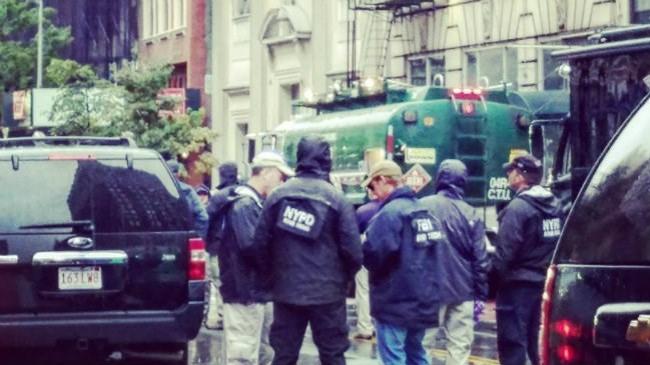 NEW YORK (CNN) -- The man suspected in Saturday's bombings in New York and New Jersey has been captured after a frantic manhunt and shootout.

Rahami is suspected of bombings Saturday in New York City and Seaside Park, New Jersey, and is believed to be connected to pipe bombs found Sunday night in Elizabeth, New Jersey, sources said.

"We have every reason to believe this was an act of terror," New York Mayor Bill de Blasio said Monday.

Rahami was captured after the owner of a bar in Linden, New Jersey, found him sleeping in the doorway of his bar Monday morning. Harinder Bains, owner of Merdie's Tavern, said he was watching CNN on his laptop from another business he owns across the street. He said he recognized Rahami and called police.

When officers responded, Rahami pulled out a handgun and opened fire, striking an officer. A foot chase ended when Rahami was shot multiple times. He was taken to a hospital for surgery. None of the officers suffered life-threatening injuries.

But two big questions remain. Why did he do it? And is anyone else responsible?

-- Rahami traveled for extended periods to Afghanistan and Pakistan in the last five years, officials said. He spent several weeks in Kandahar, Afghanistan, and Quetta, Pakistan, in 2011. While there in July 2011, he married a Pakistani woman. Two years later, in April 2013, he went to Pakistan and remained there until March 2014, visiting Afghanistan before returning to the United States. Upon returning from both visits he went through secondary screening and told officials he was visiting family, satisfying whatever concerns immigration officials had at the time.

-- The FBI described Rahami as a naturalized US citizen of Afghan descent with a last known address in Elizabeth, New Jersey, the same city where the backpack with explosives was found Sunday night. He first came to the United States in 1995 as a child, after his father arrived seeking asylum, and became a naturalized US citizen in 2011, according to a law enforcement official who reviewed his travel and immgration record.

-- The "main guy" has been caught but the investigation continues to determine if Rahami had help, sources told CNN. Though FBI Assistant Director William F. Sweeney Jr., said there is "no indication" of an active operating cell in the New York area, evidence suggests Rahami was not acting alone, said Rep. Adam Schiff and a National Counterterrorism Center official. Schiff, a California Democrat, is ranking member of the House Intelligence Committee.

-- As the investigation continues, law enforcement has stressed there is no reason to believe a bomber is on the run.

-- Investigators first identified Rahami on Sunday afternoon through a fingerprint, according to a senior law enforcement official.

-- Rahami has been "directly linked" to devices in New York and New Jersey, Sweeney said.

-- Two officers were hit in the shootout with Rahami in Linden, New Jersey, the mayor of the nearby city of Elizabeth said. One officer's vest was struck, and the other was shot in the hand.

-- Authorities believe Rahmani is the man seen in surveillance videos rolling a duffel bag near the scene of the bombing in the Chelsea neighborhood of Manhattan, according to multiple officials.

-- Surveillance videos showed the same man near the site of the explosion in Chelsea and where a pressure-cooker device was found four blocks away, law enforcement sources told CNN.

-- New York Gov. Andrew Cuomo said Monday the bombs found over the weekend have similarities, suggesting "there might have been a common linkage." He said he "wouldn't be surprised if we found a foreign connection to the act."

On Sunday at about 9:30 p.m. a backpack with multiple bombs inside was found in a wastebasket outside a neighborhood pub in Elizabeth. As authorities tried to investigate, one of those bombs exploded.

The backpack was found about 500 feet from a train trestle, officials said.

It contained up to five devices, Elizabeth Mayor Chris Bollwage said. The two men who found the backpack thought it might contain something valuable, but they alerted police when they saw wires and a pipe on the devices, the mayor said.

Bomb technicians sent a robot to examine the devices. As the robot was doing so, one of the devices detonated.

"The robot that went in to disarm it cut a wire and it exploded," Bollwage said.

The remaining four devices in the backpack will be taken to an FBI laboratory at Quantico, Virginia, Bollwage said.

Police checked all garbage cans in the immediate area but found no other suspicious items.

Elizabeth is about 16 miles southwest of New York City. Both New Jersey Transit and Amtrak warned of train delays after the incident.

The bombing in Chelsea

A few blocks away from the blast site and shortly after the explosion, investigators found a pressure cooker on 27th Street with dark-colored wiring sticking out, connected by silver duct tape to what appeared to be a cell phone, officials said. The cell phone on the pressure cooker in Manhattan provided clues that led to Rahmani's identification.

Surveillance video shows a man dragging what appears to be a duffel bag with wheels near the site of the West 23rd Street explosion about 40 minutes before the blast, according to multiple local and federal law enforcement sources.

In the video, the man leaves the duffel bag where police later found the unexploded pressure cooker. After he leaves, the video shows two other men removing a white garbage bag believed to contain the pressure cooker from the duffel bag and leaving it on the sidewalk, according to a senior law enforcement official and another source familiar with the video.

Investigators have not determined if those two men are connected to the man with the duffel bag, the sources said.

The device was taken to the NYPD Bomb Squad facility, where NYPD and FBI bomb technicians rendered the device safe.

A forensic examination of the device and its components will be conducted at the FBI laboratory at Quantico.

A federal law enforcement official said BBs and ball bearings were among the pieces of metal that appeared to be packed into the pressure cooker bombs in New York. .

Earlier Saturday, a garbage can exploded near the starting line of a Marine Corps charity run in Seaside Park, New Jersey.

No one was wounded in that blast. Two other unexploded bombs were found nearby.

But on Monday, authorities said they believe Rahmani is also linked to that explosion.

'Bigger than ever' NYPD presence

New Yorkers will see an increased police presence around the city this week, de Blasio said.

Heightened security across the city is common during the UNGA. But after the Chelsea bombing, Cuomo said 1,000 additional New York State Police officers and National Guard troops will be deployed to patrol bus terminals, airports and subway stations.

"You should know you will see a very substantial NYPD presence this week -- bigger than ever," de Blasio said.