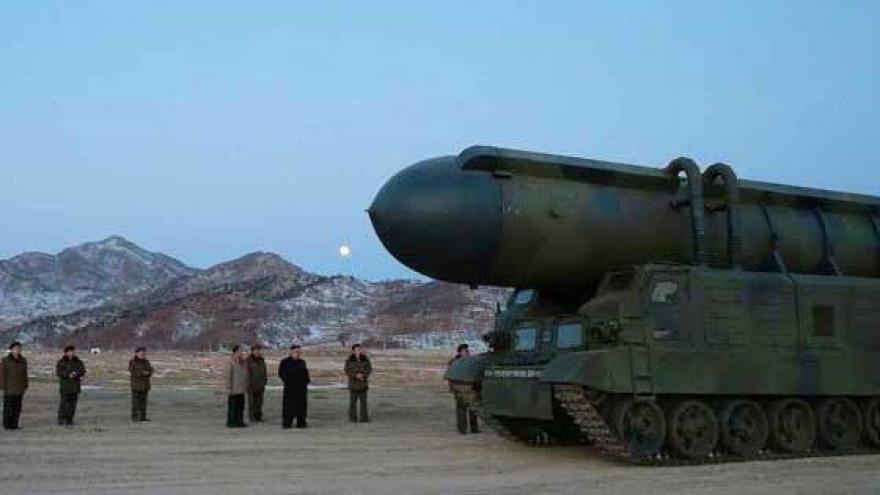 The launch involved the first land-based test of an intermediate-range missile that, in the past, has been fired from a submarine, two US officials said. And because it was launched from a west coast missile site, it flew farther than any previous North Korean tests, about 300 miles before dropping into the Sea of Japan.

"It's very similar to what they've launched from their submarines in the past," US Navy Capt. Jeff Davis told reporters Monday. "This appears to be a land-based variant of it."

Significantly, the officials noted that the missile, the Pukguksong-2, used solid rocket fuel, making it harder to detect an imminent launch because it requires less fueling time on the launch pad.

It was described by the Korean Central News Agency, the news service of Pyongyang, as a "surface-to-surface medium long-range ballistic missile" capable of carrying a nuclear warhead.

But many experts think North Korea is far off from being able to put a nuclear warhead on its missiles.

The missile was launched from the Banghyon air base in North Pyongan Province on Sunday morning.

Last August North Korea test-fired what it said was a submarine-launched ballistic missile marked as a Pukguksong-1, a name which translates as "North Star."

Solid fuel is like an explosive jelly, less corrosive than liquid fuel, and it can be more easily stored in the rocket's fuel tank that the liquid alternative which require specially lined tanks.

As with other rocket forces, North Korea's liquid fuel-powered ballistic missiles up until now required a garrison, fuel storage tanks and support vehicles to launch, which can be identified with imagery, experts say.

But solid fuel-powered missiles need much less infrastructure, making them difficult for those monitoring North Korea's military movements to spot, as there are fewer indicators, such as movement of trucks, for South Korean or US satellites and other surveillance to pick up on.

Two versions of the same missile?

"While North Korean media has stated that both the Pukguksong-1 and -2 are solid-fueled, it was widely presumed that they were based on the liquid-fuelled R-27 'Zyb' Submarine Launched Ballistic Missile that was developed by the Soviet Union in the 1960s," said Karl Dewey, an expert in chemical, biological, radiological and nuclear weapons with Jane's Defence Weekly in London.

Dewey told CNN that the different exhaust plumes seen in North Korean imagery of Pukguksong-1 tests had already prompted speculation that there might be both liquid and solid fuel versions of the missile.

The South Korean military has affirmed the North's claim that solid fuel was used in the latest test.

Regarding how far and how fast it can travel, military analysts in the West previously assessed the Pukguksong-1 of being capable of carrying a 1.5-ton warhead nearly 450 kilometers, or a 1-ton warhead between 600-800 kilometers.

The range of the new Pukguksong-2 is difficult to determine. "The 500-kilometer distance traveled will very much have been a political decision (rather than a technical limitation) designed to be seen as a provocation by Japan, without escalation, and to test the new US administration," Dewey told CNN.

He said the firing range of these types of missiles can be expanded by adjusting the angle at which it is pointed, so that it either travels vertically or horizontally, or by increasing fuel efficiency.

Earlier, the South Korean Joint Chiefs of Staff spokesman told CNN they also believe that Pyongyang employed a cold-launching system, in which the missile is lifted off the ground using pressure and then ignited mid-flight, as opposed to igniting it on the ground -- which is said to be less stable.

More than 20 ballistic tests in a year

Pyongyang has carried out more than 20 ballistic missile tests from January through October 2016 in what is an ambitious testing program to develop nuclear capability.

On New Year's Day, North Korean leader Kim Jong Un declared that the country had "entered the final stage of preparation for the test launch of intercontinental ballistic missile".

He also said Pyongyang would continue to build up its "capability for preemptive strike" until the US and its regional allies "stop their war games they stage at our doorstep".

"After a lull that coincided with the US presidential election and transition, Sunday's test was a resumed step in that development," wrote Mark Fitzpatrick, Executive Director/Americas of the UK-based International Institute for Strategic Studies, in a blog post.

"If the ambitious testing rate continues, North Korea may have an effective nuclear-tipped inter-continental ballistic missile (ICBM) by the end of Trump's four-year term."