Protesters around country call for Trump to release tax returns 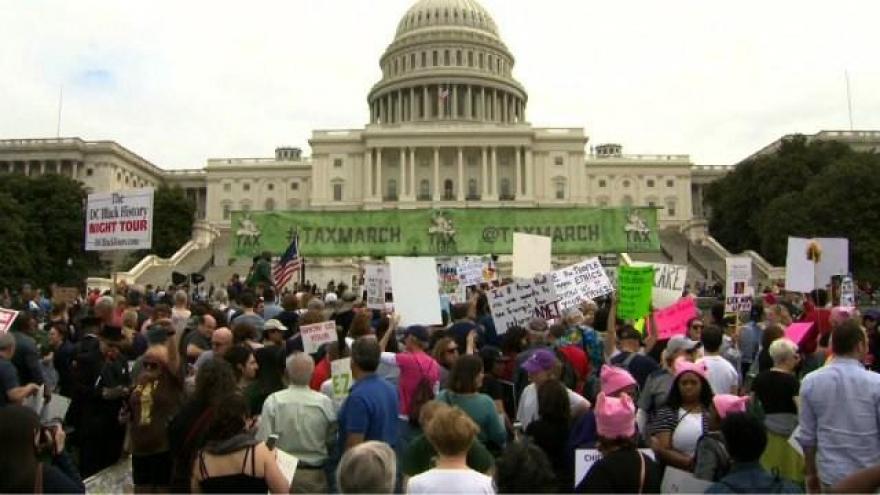 NEW YORK (CNNMoney) -- Protesters in cities across the country came out Saturday to call on President Trump to release his tax returns.

Demonstrators came out in large numbers in about 200 other cities, including a few outside the U.S., according to organizers.

Trump has said that Americans "don't care at all" about his tax returns, but polls show 74% of Americans say he should release them.

Many lawmakers, including some Republicans, have also called on him to make them public. And a petition demanding that Trump release his returns has garnered more than 1 million signatures.

Also on Saturday, a rally in Berkeley, California, that brought out supporters and opponents of President Trump turned violent, resulting in more than a dozen arrests, officials said.

That rally was about free speech, according to local news reports. A couple people were injured, Berkeley Police spokesman Byron White told CNN.

For the past 40 years, every U.S. president and presidential candidate has released tax documents.

Still, the White House has not indicated Trump has any intentions of releasing his returns. So Trump critics are prepared to make some noise.

"We march to demand that the president release his returns, as he has repeatedly promised, but failed, to do," the Tax March website reads. "We march because it is in the best interest of the American people to know what financial entanglements and conflicts of interest our leaders have."

Much like the "Pussyhats" symbolized by the Women's March in January, the hallmark of this protest are giant inflatable chickens.

On Saturday morning, chickens could be spotted on the steps of the Capitol building and outside the Trump Hotel. Thirty-foot inflatable chickens will also go up at the marches in New York City and San Francisco, according to Kevin Donohoe, a Tax March organizer.

The inflatable chickens were designed in Hong Kong to celebrate the Year of the Rooster, and they were purposely made to resemble Trump this year. Organizers for Tax March San Francisco discovered the chicken and re-dubbed it "Chicken Don" to poke fun at the President for being too afraid to release his tax returns. Since then it's spread across the country with dozens of marches purchasing chickens, Donohoe said.