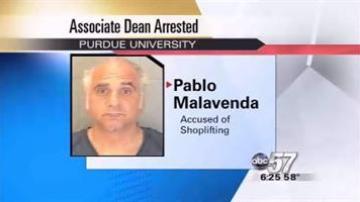 WEST LAFAYETTE, Ind. -- Purdue University has placed its Associate Dean of Students on paid administrative leave after the West Lafayette police arrested him for shoplifting.

50-year-old Pablo Malavenda was arrested on Saturday for shoplifting at a Wal-Mart on U.S. 52 in West Lafayette, Ind.

Police were called to the store around 2 p.m.  Malavenda was arrested on a preliminary charge of theft.

Police say he took about $225 of household items.

According to the Purdue University salary database, Malavenda has a salary of $69,650 per year.

Malavenda was released on Sunday after posting bond.

The incident is still under investigation. Police say the investigation should be wrapped up before the end of the month.

Malavenda has been with the university since 1998.