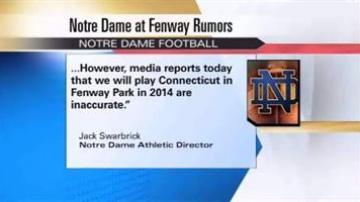 NOTRE DAME, Ind. -- The rumors of a possible football match-up between Uconn and Notre Dame at Fenway Park are untrue.

Twitter went on fire Tuesday morning when a rumor started going around that the Huskies and the Irish would play a game at the home of the Boston Red Sox in 2014.

"I love Fenway Park. I just don't know if its big enough. We don't want to get into that Northwestern-Illinois game where the end zone's not big enough," Kelly said. "If it's on the schedule, we're gonna play it. Being a Boston guy, baseball hasn't been very good there, so maybe we can bring some football."

This would have been the first game played at Fenway since 1968.

Swarbrick said that "we have to work to do on our future football schedules, given the announcement last week relative to our upcoming Atlantic Coast Conference relationship. However, media reports today that we will play Connecticut in Fenway Park in 2014 are inaccurate."