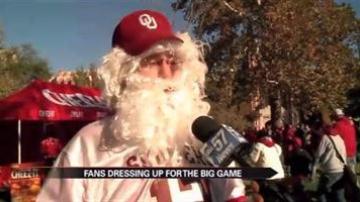 NORMAN, Okla. -- Fans in Oklahoma for the Notre Dame game are doing more than just showing their team spirit. Some even dressed in extreme costumes on game day.

Superman, Sasquatch and an Irish lad were just some of the costumes at the game.

Shawn Holtsclaw is an Oklahoma born Irish fan who sported a homemade kilt.

"I actually did make it for Saint Patrick’s Day," said Holtsclaw.

Santa even got into the Sooner spirit.

He said he was on vacation and wanted to see his team do some receiving of their own against Notre Dame.

Even though it was cold, some costumes were warmer than others just walking around in sweatshirts.

"It really is warm, everyone is so jealous," said Patrick McSweney, who was wearing a Sasquatch costume.

Whether homemade, fancy or even laid back, the fans at the Oklahoma-Notre Dame game dressed for success.