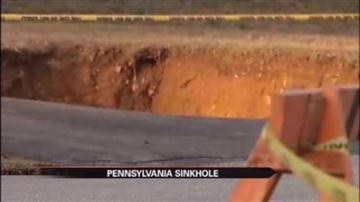 PENNSYLVANIA -- A massive sinkhole in Pennsylvania forced the evacuation of a house.

The 40-foot wide hole opened Sunday morning after a sewer line break earlier in the week.

A second, smaller sinkhole was also found but has since been fixed.

Those who live near there are just thankful that no one has been hurt.

"The geotechnical engineer is going to analyze the entire area tomorrow. He will let us know exactly what will have to be done,” said a contractor.

Crews are working to try and install a temporary sewer line there.