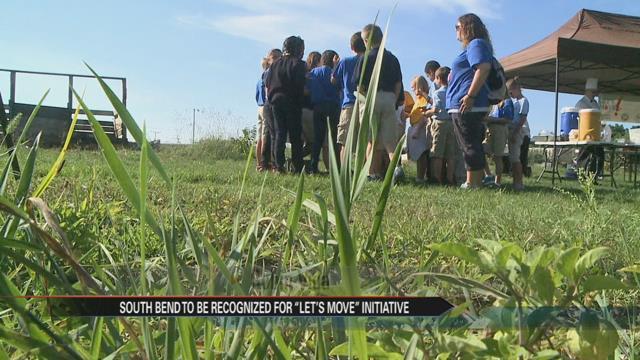 Next week the city of South Bend will be recognized at the White House for achieving higher than any other Indiana city for first lady Michelle Obama’s Let’s Move campaign.

On Thursday there was a special celebration for the achievement in South Bend.

“If you just eat junk food you won’t have a healthy diet,” said J.T. Bellina, a fourth grader at Kennedy Primary School who says he enjoys healthy foods.

Bellina couldn’t be happier that his school took a field trip to Unity Gardens.

Beyond the fun of munching on greens, South Bend and South Bend Community schools got a special recognition from Obama.

“We’re the first city in the state to achieve all five gold medals,” Robin Vida, director of education at the St. Joseph County Health Department said.

South Bend has achieved gold metal status for Let’s Move, which educates and encourages children to eat healthy and exercise.

It only took them a year and a half to do it.

That declaration was first made evident in the South Bend Community Schools cafeteria.

“For our lunch they won’t serve us unhealthy foods. Usually they’ll always have a banana on the side or maybe an apple or something like that,” Vida said.

It’s a message Mayor Pete Buttigieg and Vida will take to the White House next week.

“We’ve been invited to be a Let’s Move city all star,” Vida said.