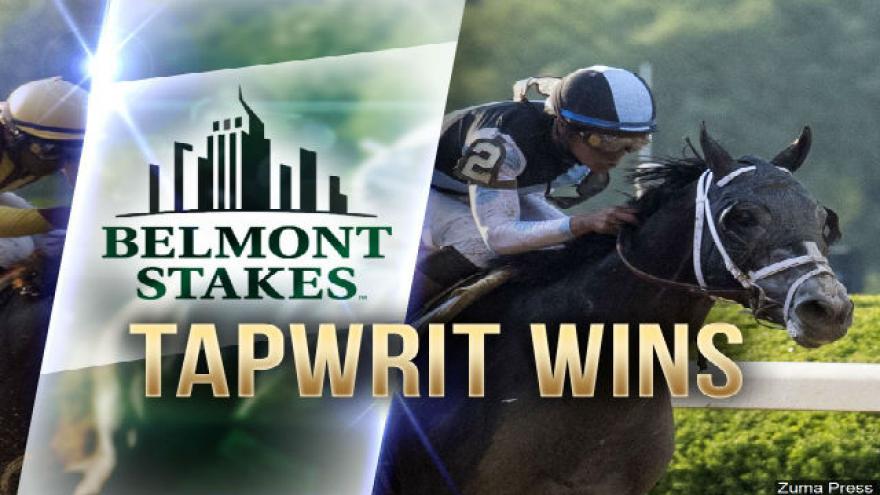 Tapwrit, ridden by Jose Ortiz, won the Belmont Stakes on Saturday. This is the second consecutive Belmont triumph for the Ortiz family. Photo courtesy Zuma Press

For Todd Pletcher, thoroughbred racing's seven-time trainer of the year, it was the second Triple Crown victory of the season. Another of his horses, Always Dreaming, took the Kentucky Derby in May but didn't race Saturday in the 1-1/2 mile event.

Neither was Cloud Computing, which won the Preakness three weeks ago.

Jose Ortiz said the difference between the Belmont and the Kentucky Derby, in which Tapwrit was sixth, was the longer distance Saturday.

"I was sure that he could handle it. Great training job by Todd," Ortiz told race broadcaster NBC.

Irish War Cry, which led most of the race, finished second by two lengths after being passed in the home stretch. The winning time was 2:30.02, six seconds off the record set by Secretariat in 1973.

"That last sixteenth (of a mile) Tapwrit really dug down deep," Pletcher said.

The race was held in Elmont, New York, at Belmont Park, Tapwrit's home base.

"That's always an advantage," Pletcher said. "And we felt like with the five weeks in between (the Derby and the Belmont), and the way this horse had trained he had a legitimate chance."

One-eyed horse Patch, also trained by Pletcher, was third. Pletcher is the first trainer since D. Wayne Lukas (1996) to have different horses win the Kentucky Derby and Belmont.