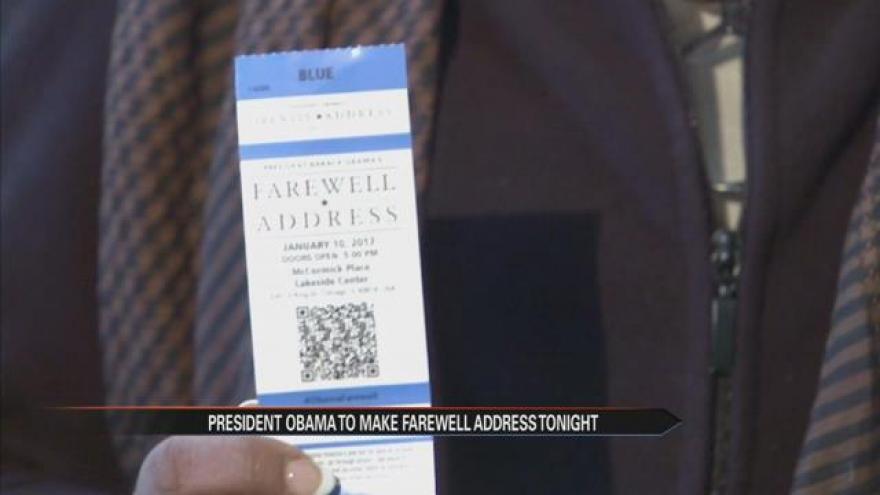 As his 8 years in the oval office comes to a close, President Obama will give his farewell address in his hometown of Chicago this evening and thousands are expected to attend.

People in the Chicago area snagged their tickets early Saturday morning at McCormick Place for the president’s final goodbye.

Many are questioning what the main focus of his speech will be.

“About the only the only thing I'm certain of is there will be some sort of call for unity,” said Michael Cornfield, a political scientist from George Washington University. “That's what you do when you leave. You remind people that they are all Americans.”

Obama and his speech writing team are expected to work on his speech until Tuesday morning. Instead of discussing his list of accomplishments, he will thank Americans and focus on his passing of the baton to the next generation of leaders.

The White House didn’t disclose how many tickets were given out, but officials estimated 7,000 people had one in their hands before 6:30 A.M. Saturday morning.

Now the free tickets are popping up on websites like eBay and Craigslist going for $5,000 to even $7,500 each. People have offered to exchange things like “Hamilton” tickets or their flat-screen TV’s just to be able to witness history.

To accommodate the thousands heading to the address, The South Shore Line has re-routed some trains. Normally, they serve McCormick Place on weekends, but select weekday trains will stop at the venue.

While riding the train, make sure to notify the conductor that you wish to stop at McCormick Place.

The farewell address will begin at 8 P.M. CST. ABC 57 News will have team coverage this evening from Chicago. Stay with ABC 57 news on-air, online and on Facebook and Twitter for updates.