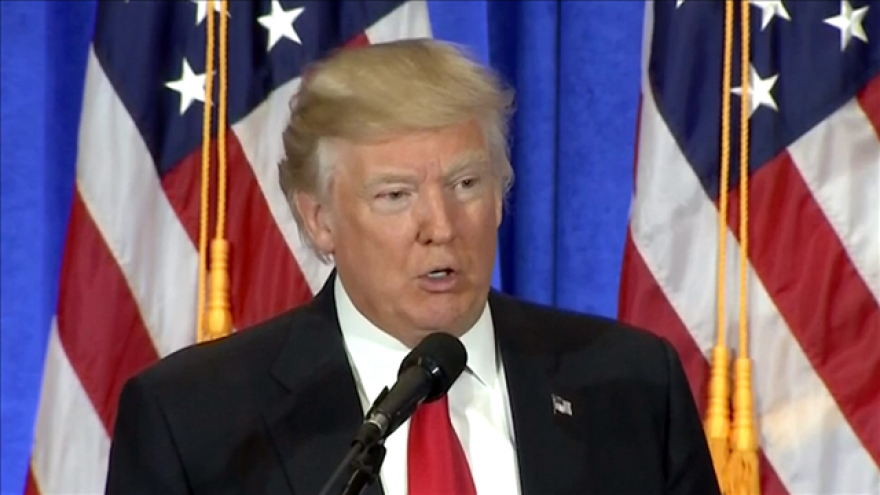 WASHINGTON (CNN) -- President-elect Donald Trump harshly responded to civil rights icon and Georgia Rep. John Lewis on Saturday, calling him "all talk" and "no action" after Lewis said Trump was not a "legitimate" president.

"Congressman John Lewis should spend more time on fixing and helping his district, which is in horrible shape and falling apart (not to mention crime infested) rather than falsely complaining about the election results. All talk, talk, talk - no action or results. Sad," Trump tweeted Saturday, which happened to fall on the weekend of the Martin Luther King Jr. federal holiday.

Trump later doubled down on his criticism -- though he did not take aim at Lewis' district -- tweeting Saturday night: "Congressman John Lewis should finally focus on the burning and crime infested inner-cities of the U.S. I can use all the help I can get!"

Lewis -- an ally of King who was brutally beaten by police in Selma, Alabama, in 1965 while marching for civil rights -- represents a Georgia district that includes most of Atlanta. On the campaign trail, Trump regularly decried crime in urban areas while pledging to revitalize neighborhoods primarily populated by black Americans.

A Hillary Clinton supporter, Lewis criticized Trump's ascension to head of state due to Russia's alleged meddling in the 2016 election.

"I don't see this President-elect as a legitimate president," the long-serving Democrat told NBC News' Chuck Todd in a clip released Friday.

It was an astonishing rebuke by a sitting member of Congress toward an incoming President. Trump, however, largely launched his political career by calling into question the legitimacy of President Barack Obama's presidency by repeatedly suggesting he wasn't born in the United States.

Cornell William Brooks, the president of the NAACP, said Trump's remarks were disrespectful and called on him to apologize.

"By disrespecting @repjohnlewis, @realDonaldTrump dishonored Lewis' sacrifice & demeaned Americans & the rights, he nearly died 4. Apologize," Brooks tweeted, including an image of a bloodied Lewis taken during the Civil Rights Era.

Donna Brazile, the interim head of the Democratic National Committee, denounced Trump's remarks and said at a DNC gathering in Phoenix that Lewis "took action."

"He took action from marching from Selma to Montgomery. He took action in marching toward men wielding clubs across the Pettus Bridge. They fractured his skull because of the color of his skin. But John Lewis never stopped marching for justice and equality for all people," she said.

"Ahead of #MLKday2017, let us remember that many have tried to silence @repjohnlewis over the years. All have failed," tweeted House Minority Leader Nancy Pelosi.

"John Lewis is an icon of the Civil Rights Movement who is fearless in the pursuit of justice and equality. He deserves better than this," she tweeted.

Rep. Keith Ellison, who is vying to become the Democratic National Committee chairman, said Trump has "no clue" who Lewis is.

And Republican Sen. Ben Sasse, a frequent Trump critic, praised Lewis, "John Lewis and his 'talk' have changed the world."

By Saturday evening, Lewis was fundraising off Trump's comments.

"Today, Donald Trump attacked me on Twitter. He said that I'm 'all talk' and 'no action,' " Lewis wrote. "I've been beaten bloody, tear-gassed, fighting for what's right for America. I've marched at Selma with Dr. King. Sometimes that's what it takes to move our country in the right direction."

He continued: "Some leaders reject decades of progress and want to return to the dark past, when the power of law was used to deny the freedoms protected by the Constitution, the Bill of Rights, and its Amendments.

"I remember when segregation was the law of the land that ordered our society in the Deep South. The forces of law and order in Alabama were so strong that to take a stand against this injustice, we had to be willing to sacrifice our lives for our cause.

"It took massive, well-organized, non-violent dissent and criticism of this great nation and its laws to move toward a greater sense of equality in America."

Lewis is one of an increasing number of Democratic lawmakers who are boycotting Trump's inauguration after learning more about Russia's role in the 2016 election. Intelligence agencies have said Russia hacked Democratic groups with the intent of hurting Clinton's campaign and aiding Trump's. The President-elect has repeatedly expressed skepticism at the conclusions.

"You cannot be at home with something that you feel that is wrong," Lewis told NBC News.

"Donald Trump has proven that his administration will normalize the most extreme fringes of the Republican Party. On Inauguration Day, I will not be celebrating. I will be organizing and preparing for resistance," she said Thursday in a statement.

Reps. Luis Gutierrez of Illinois, Jared Huffman of California and Katherine Clark of Massachusetts, are also boycotting the historic event.