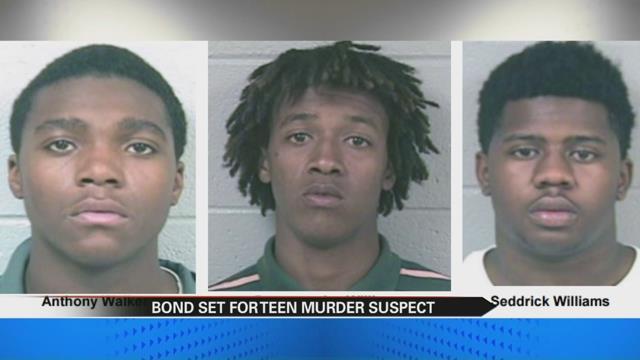 First degree murder and felony firearm charges have been filed against two 18-year-olds in Benton Harbor.

Walker is suspected of killing 17-year-old Karlos Kelly on Sunday afternoon in the Blossom Acres Apartment Complex with a shotgun.

Williams is believed to be the driver of the getaway driver. Williams was arraigned Tuesday but Walker is still at large and being sought by police.

According to the prosecutor Walker and Williams drove to the Blossom Acres Apartment complex with the intent to kill Karlos Kelly on Sunday afternoon.

In court on Tuesday family and friends of Seddrick Williams were crying as the judge set Williams’ bond at $2 million.

Berrien County Court Jude Charles LaSata said, “Felony firearm which is a felony. the maximum penalty is 2 years consecutively with and proceeding any term of imprisonment imposed for the felony or attempted felony.”

On Monday ABC57's Alexandra Koehn spoke to the victim's family. They said charges won't bring their 17-year-old brother back.

Kalasandra Kelly said Karlos was playing basketball at the Blossom Acres Apartments when he was gunned down.

Sepic said, “He’s not alleged to be the actual shooter. Although he assisted with the use of his car and presence.”

After filing several freedom of information requests we found out about the pasts of the 2 suspects and the person police want for questioning.

Since March, Seddrick has been convicted of four non-violent misdemeanors including disturbing the peace and fraud.

18-year-old Daquantries Williams, wanted for questioning in the case but not charged, has a rap sheet that includes two felony convictions and two misdemeanors for carrying a concealed weapon and fleeing.

Suspected shooter Walker has a couple of mugshots in the system, but according to his arrest record he has not had any convictions as an adult in Berrien County.

Police are still looking for Walker and are asking for tips that lead to an arrest. You can call Benton Township at 269-926-3086.