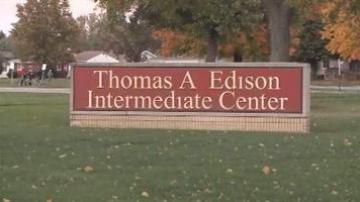 Thursday, an employee came forward with allegations that a coworker at South Bend's Edison Intermediate Center, sexually abused a special needs student and even stole their lunch money.

Captain Phil Trent, with the South Bend Police Department, said police did not know about the allegations until after ABC 57's news report aired Thursday night. Trent said if they did, it would have been documented.

The accusations first surfaced when a teacher's aid at Edison Intermediate Center confirmed to ABC 57 that she witnessed a coworker sexually abuse a special-education student and steal their lunch money. Worse still, the employee claims it has been going on for at least two years.

"The people that called this to our attention was the individual in charge of intermediate schools for the school system, who then met the officer at Edison school, along with the principal," said Trent Friday.

According to Trent, school officials at Edison Intermediate did not contact the school's resource officer about the sexual abuse allegations until noon Friday. Trent said the police report was then reviewed and generated by 1 p.m. the same day, "We were provided no further data relevant to the investigation, we have no names thus far and have turned the case over to the special victims unit."

Indiana state law requires that child abuse allegations be reported to both police and school officials, immediately. Teachers and staff members, within South Bend schools, even have to sign a waiver saying they understand the law.

"It's pretty clear cut, upon first suspicion law enforcement and the administration needs to be advised immediately.

That does not seem to be the case, though. According to an email that ABC 57 obtained, Sniadecki notified both the Superintendent Dr. Schmidt and school board President Roger Parent five days before it was reported.

"The only reason why we get involved is the jurisdiction, in which the school is in, needs to do the initial report so that there is at least a document saying something occurred," said Trent.

ABC 57 also tried to contact Superintendent Schmidt, who is out of town at a conference. We tried to reach Schmidt by email and on her cell phone, but ABC 57 still has not gotten a response from anyone in the school system.