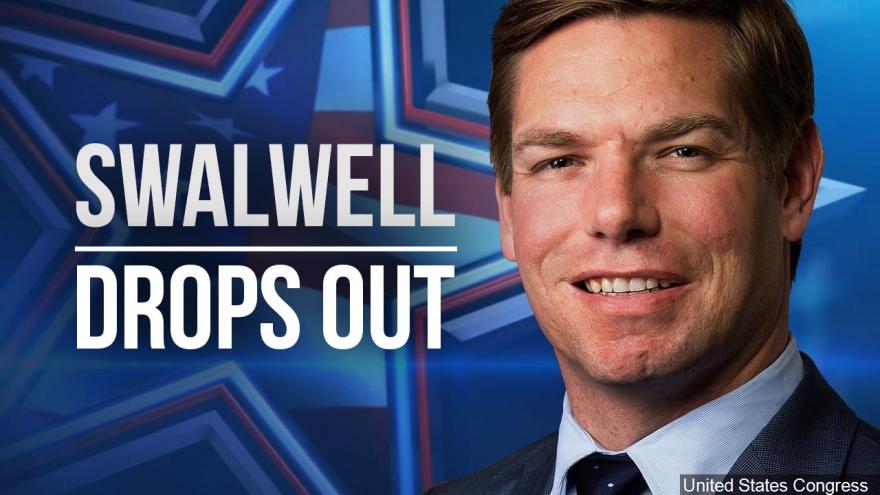 WASHINGTON (AP) — Rep. Eric Swalwell on Monday became the first candidate in the crowded 2020 Democratic presidential primary to exit the campaign, saying he would run for reelection to his California congressional seat next year.

Swalwell, 38, announced his exit in his home district, describing his decision as "the beginning of an opportunity in Congress with a new perspective" influenced by his 3-month-long presidential bid.

The four-term congressman's White House effort never progressed significantly with voters, a fact Swalwell acknowledged on Monday in saying that "polls have had their way" in determining his viability. He had signaled before departing the race that he would consider bowing out if he was in danger of missing the cutoff for the next nationally televised Democratic debate, which is based on separate polling and donor qualifications.

Montana Gov. Steve Bullock missed the threshold for last month's debate but was ahead of Swalwell in the competition for this month's televised Democratic faceoff.

Asked about whether other candidates with similarly lackluster success so far in the packed Democratic primary should also consider dropping out, Swalwell demurred, describing the abandonment of a campaign as "really a personal decision." He also declined to indicate which of his onetime presidential rivals he might endorse in the primary and said he had not planned to seek the presidency as "a vanity project" or "to write a book."

As Swalwell prepares to seek another term in Congress, he said that he would not "take anything for granted." Indeed, he already has a challenger in his liberal-leaning district: Democrat Aisha Wahab, a city councilwoman in Hayward.

But Swalwell is viewed as a rising star in the House Democratic majority, with Speaker Nancy Pelosi lauding him during an appearance in San Francisco on Monday. "He had a message of national security and gun safety that he wanted to convey to the country and he did that," Pelosi told reporters.