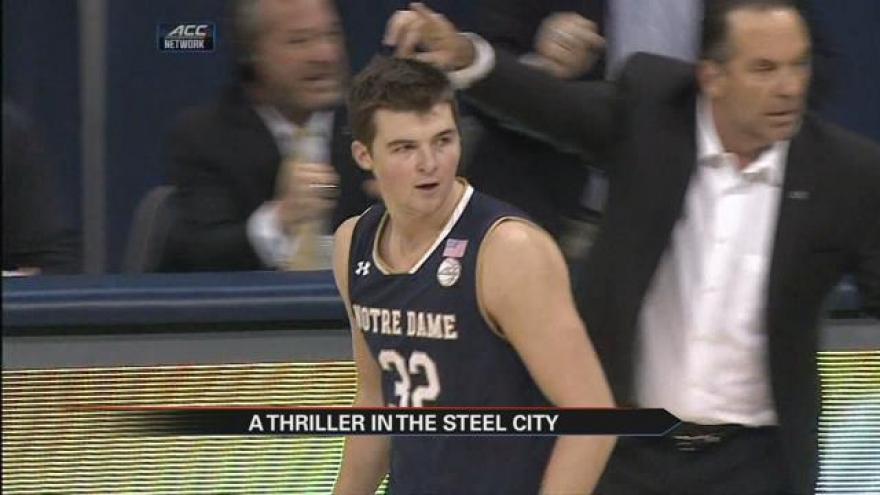 Until the end, that is.

Then Vasturia did what coach Mike Brey expects his co-captain to do whenever the stakes are raised. He stayed calm. He didn't panic. And he made big shot after big shot, including the one that gave the Irish another high-wire victory over Pitt. Vasturia's 3-pointer from the wing with 2.5 seconds left in overtime lifted Notre Dame to a 78-77 victory in the Atlantic Coast Conference opener for both schools.

The Panthers took a 77-75 lead on a runner by Jamel Artis with 41 seconds to play. Vasturia missed a shot but grabbed his own rebound with 21 seconds left, allowing the Irish to reset. Point guard Matt Farrell drove the lane and stumbled but flung it to Vasturia in the corner. Vasturia pump faked Pitt's Sheldon Jeter out of the way, took a step to his right and made the 3-pointer right in front of the Notre Dame bench to quiet a raucous Petersen Events Center.

"You've just got to keep coming back to him," Brey said . "I thought when he got a clean look I'd have been shocked if it didn't go down because we've seen him make so many."

Vasturia went 1 of 6 from the field during regulation but hit two free throws with 25 seconds left to send it to the extra session and scored eight of Notre Dame's 10 points in overtime.

Bonzie Colson led the Fighting Irish (12-2, 1-0) with 21 points and 14 rebounds. Farrell added 15 points for Notre Dame, which won its sixth straight overtime game. The Irish are 14-3 in their last 17 games pushed beyond regulation.

"Our veterans were already talking about it, 'Fellas, this is what we do,'" Brey said about the huddle before overtime began. "It's a great psychological advantage for us."

Artis and Michael Young finished with 25 points each for Pitt (11-3, 0-1), which appeared in control after a layup by Jeter gave the Panthers a 75-70 lead early in overtime. Colson hit a layup before Vasturia made a 3-pointer to tie it to set up a taut final minute.

Notre Dame: The Irish don't get rattled much. Brey credited his team from playing better when things got tight following narrow nonconference losses to defending national champion Villanova and Purdue, good traits to have heading into the two-month grinder that is the ACC.

Pitt: The Panthers have one of the toughest schedules in the league, including two meetings each with Virginia and North Carolina. At home against an upper middle class ACC team that plays a similar style, the Irish appeared gettable. Instead they head into a difficult stretch that starts on Tuesday at home against the Cavaliers.

Notre Dame figures to stick around the Top 25 for another week after winning for just the fourth time in 10 visits to The Pete.

Notre Dame received a jolt in the second half from freshman guard T.J. Gibbs, who scored all seven of his points over the final 20 minutes in the building his older brother Ashton called home while playing for Pitt from 2008-12. With the student section chanting "Ashton's better," Gibbs hit a 3-pointer and a reverse layup during a 16-3 run that gave the Irish an eight-point lead.

"This is the one I'd be worried about and he just plays," Brey said. "That's a big time game and he gave us really key minutes. He's unafraid."

Notre Dame: Welcomes No. 6 Louisville on Tuesday. The Irish are 5-4 against the Cardinals since 2010-11.

Pitt: Hosts No. 12 Virginia on Tuesday. The Panthers are 0-4 against Cavaliers since joining ACC in 2013.