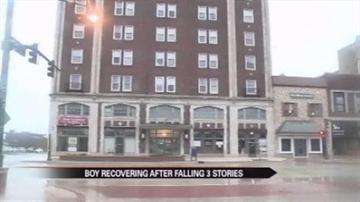 ELKHART, Ind. -- A 12-year-old boy is recovering at Memorial Hospital after he fell three stories from an Elkhart apartment complex. Police say it happened sometime before 11:30 Thursday afternoon.

Helen Conley was heating up her lunch in the microwave when she noticed something strange outside her window.

“I saw the maintenance man and police man on the roof right outside my window,” said Helen Conley.

So she went downstairs to see what was going on, but what her neighbors told her was shocking.

According to police, the boy jumped out the fifth floor window and landed on the second story roof.  He was conscious and breathing when medics arrived, but according to neighbors his injuries were pretty severe.

“He was on the gurney  They told him that he had a broken leg and a broken neck,” said Conley.

Conley says she is still in disbelief that this happened in her apartment building.

“I do not know what the child was thinking,” said Conley.

She hopes by some miracle, this young boy makes a full recovery.

“I hope he survives and I hope he and his family get the help they need,” said Conley.