City of Detroit files for bankruptcy 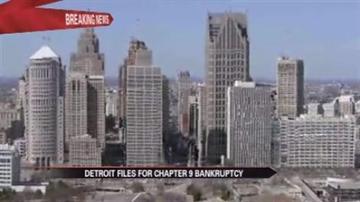 DETROIT — The city of Detroit has filed for Chapter 9 bankruptcy. Detroit is the largest city in United States history to file for bankruptcy protection.

According to our affiliate in Detroit, the city could go into bankruptcy as early as Friday.

The emergency manager of Detroit initiated the process. It was approved by the governor.