Elkhart mom fights off intruder with a lamp 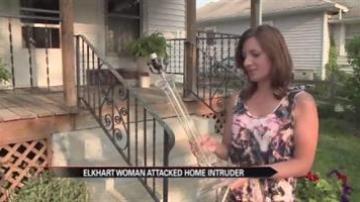 ELKHART, Ind.-- A 25-year-old Elkhart mom woke up in the middle of the night on Saturday to find a stranger standing over her.

Police describe the man as a white male around 6 feet tall and weighs 150-190 pounds.

They say he broke into a home in the 1000 block of Michigan Street just before 5 a.m. on Saturday.

Laura Miller said she jumped up and began punching the intruder who was nearly three times her size.

She said she's just happy her son wasn't home with her that night.

Miller said, "I have bruises here and here, I hit him on the back of the neck and I just kept hitting him in the same spot because he wasn’t really moving too fast and I think he was rethinking his plan, then I grabbed the lamp off my nightstand and started beating him.”

Miller said the man was wearing a grey bandana to disguise his face.

Miller said, “I was screaming at the top of my lungs and I think that’s what shocked him too, possibly he anticipated quietly having me get scared and kind of slink away from him and my first reaction was to stand up on my bed so I was taller than him and have the advantage.”

Miller said it was what she found in her bed later that scared her the most.

“I chased him out of my room onto the dark part of Cappys parking lot and then when the cops got there, and I was showing the detective and the police what happened and where it occurred, that’s when I turned on my bedroom light and noticed he had one of our kitchen knives, a really sharp paring knife, on the end of my bed," Miller said.

If you have any information in this case, contact the Elkhart Police Department.