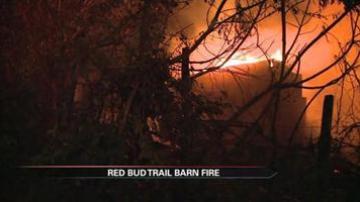 In South Bend a fire broke out at a vacant duplex in the 700 block of Lincoln Way East around 11:30 p.m.

A preliminary investigation shows the fire started on the first floor and then spread to the rest of the home.

The fire happened in Bertrand Township in the 2300 block of Red Bud Trail.

Officials said three calves were inside, but the owner got them out in time.

The rural location caused crews to battle a water shortage, but the fire was put out.

The fire was so big 11 departments assisted from Indiana and Michigan.

On Tuesday, crews plan to use an excavator to spread out more than 1,500 bales of hay that caught fire in the barn.

In Mishawaka, a house in the 600 block of Indiana Avenue caught fire around 4:45 a.m.

A couple was inside at the time. The husband smelled smoke, and they got out safely.

The homeowners said they had been recently renovating their home.

They believe the fire was electrical and started outside and then spread to the home.

Crews continue to investigate the causes of all three fires.