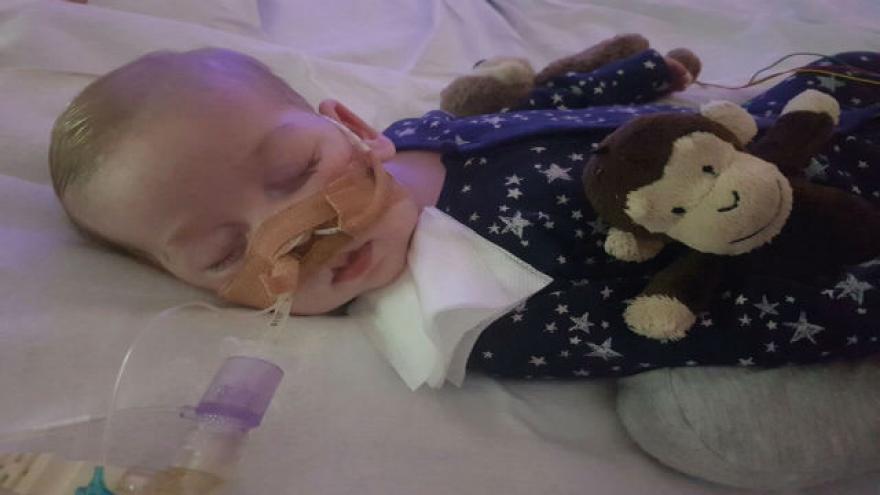 Connie Yates and Chris Gard are battling to keep their terminally ill 11-month-old son on life support so they can take him overseas for the treatment, a step opposed by his doctors on the grounds he may suffer without experiencing any benefit. Photo courtesy Charlie Gard Family Handout

(CNN) -- The London hospital where baby Charlie Gard is being treated for a rare genetic disorder has been receiving death threats.

"The GOSH community has been subjected to a shocking and disgraceful tide of hostility and disturbance," Great Ormond Street Hospital (GOSH) Chairman Mary MacLeod said in a statement released Saturday.

The terminally ill infant is at the center of an international legal controversy over whether the hospital should support experimental efforts to extend his life.

"Staff have received abuse both in the street and online," the statement continued. "Thousands of abusive messages have been sent to doctors and nurses whose life's work is to care for sick children. Many of these messages are menacing, including death threats. Families have been harassed and discomforted while visiting their children, and we have received complaints of unacceptable behavior even within the hospital itself.

"Whatever the strong emotions raised by this case, there can be no excuse for patients and families to have their privacy and peace disturbed as they deal with their own often very stressful situations or for dedicated doctors and nurses to suffer this kind of abuse."

MacLeod said the hospital is in close contact with Metropolitan Police.

Charlie's parents, Connie Yates and Chris Gard, condemned the threats and said they have experienced a backlash since the hospital revealed them.

"We too have suffered from the most hurtful comments from the public," Yates said in a statement. "We do not and have not ever condoned any threatening or abusive remarks towards any staff member."

"We are very grateful to the staff for the care of our son," Gard added. "Without the excellent care of the doctors at GOSH our son would not even be alive and not a day goes by when we don't remember that. We also know what a devastating place this can be for upset and anxious parents and we are constantly mindful that they have enough on their plate without hearing about our problems too."

The couples' official spokesperson, Alison Smith-Squire, praised the hospital and called for an end to the threats and abuse from all sides.

"GOSH is undoubtedly a remarkable establishment and we are all proud of its world-renowned reputation," she said in a statement. "It is one of our finest hospitals and equally does not deserve any abuse for doing what it feels is in the best interests of a patient. ... [I]t is time everyone refrains from making threats and nasty remarks to either the family or the hospital."

Eleven-month-old Charlie Gard is at the center of a legal battle and an international controversy.

He was born with a genetic mutation called mitochondrial DNA depletion syndrome. It leads to weakened muscles and organ dysfunction, among other symptoms. The prognosis is poor for most patients. Charlie is unable to breathe or move on his own.

Great Ormond Street Hospital, where Charlie has been since October 2016, received permission from the European Court of Human Rights in June to discontinue life support.

But his parents want to bring him to the United States for an experimental therapy called nucleoside bypass therapy. It has never been used to treat Charlie's form of mitochondrial DNA depletion syndrome.

The doctors at GOSH have argued that every medical option has already been considered and treatment in another country would not be in Charlie's best interest.

A trial involving Charlie's case is set to begin Tuesday at the UK High Court.

Zak Golombeck, a medical negligence lawyer in the UK, told CNN that a judge will sift through competing claims from clinicians and the family.

"It's really about the judge considering all of the evidence," he said. "These cases come to court because the family and the clinicians don't agree and therefore there has to be judicial intervention. If there was obviously an agreement that could be reached in these cases then that's the preference, but otherwise the courts have to step in."

"There is a legal framework," Golombeck continued. "There are quite uncontroversial, unambiguous cases and case law that have explained this area. And the test is quite clear. It's what is in Charlie's best interest?"

There were fireworks at a pre-court hearing on Friday. Charlie's parents stormed out of the proceeding after a lawyer for the hospital said a new brain scan of the ailing baby made for "sad reading," according to the UK's Press Association.

Upon hearing the lawyer's comments, Yates began to cry and said, "we haven't even read it."

Charlie's father then yelled "evil" and added, "I'm not f****** listening to this biased sh*t anymore."

The couple left the courtroom after the outburst.

The hospital's lawyer apologized and told the judge she didn't mean to cause distress.

"This is a tough, tough case," medical ethicist Arthur Caplan told CNN. "You're in a situation where you're worried that the love that the parents obviously have for Charlie in trying to help him may be blinding them to the fact that they could be hurting him. The guardian that was appointed in this case, the courts, many in the UK that have looked at this case, have come down on the side of the doctors because they worry that Charlie may be suffering.

"So you don't want to prolong his life if he's in pain, if he's suffering. If that isn't true then I think the parents' case is stronger," Caplan added. "But right now, I think that's what the court is concerned about."