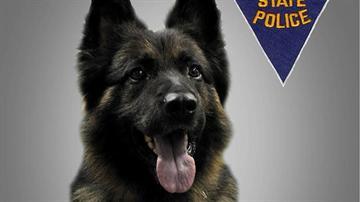 According to the Indiana State Police, Sellersburg Police responded to a domestic call on Iowa Street. When they arrived, the suspect fled and eventually broke into a home on Delaware Street and barricaded himself inside.

Trooper Nathan Abbott and K-9 Kilo were called to the scene.

Shots were fired. The police officers retreated from the home, but Kilo didn’t.

During the standoff, the suspect fired at officers and shot a Clark County Sheriff’s Deputy. He was taken to a Louisville hospital with non-life threatening injuries.

Kilo and Abbott began their tour of duty January 5, 2007. If you would like to make a donation in memory of Kilo to support the ISP K-9 program, donations may be sent to "Kilo Memorial Fund", CFK/ISP Foundation, 1415 Shelby Street, Indianapolis, IN 46203.