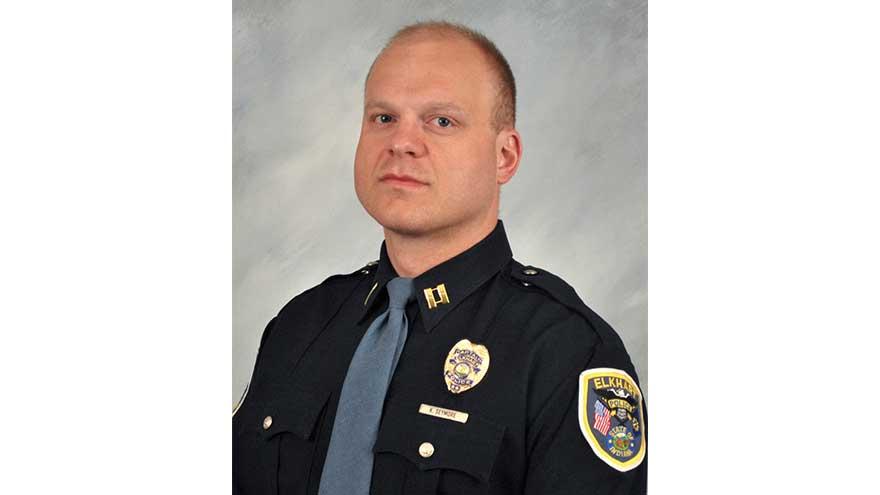 Chief Seymore has been with the Elkhart Police Department for 22 years.

“Good afternoon. Today, I am pleased to appoint Kris Seymore as Elkhart’s Police Chief. He is a 22-year veteran of the EPD who most recently worked in the Homicide Unit and in this role, will work alongside Assistant Chief Chris Snyder, to implement the necessary changes he spoke passionately about during the interview process.

Speaking of Chris Snyder, before I say more about his successor, I want to say a few things about this man. At a time of turmoil in the Elkhart Police Department, Chris Snyder stepped up and became Chief in January, 2019. He has served this city and his department honorably and effectively and has been a reliable partner for me over these past 6 months. I am so grateful to have had him in that role as we navigated through some difficult crises.

Within Chief Seymore’s 22 years with the EPD, he has had experience in patrol, special response, anti-crime, arson and juvenile investigations, as assistant chief, detective captain and field supervisor lieutenant for homicide. He brings a burning passion to elevate the performance, relationship, and perception of our Police Department. He is overflowing with initiatives to implement to achieve proactive intervention that will build public safety within our community.

We were fortunate to have a large, qualified pool of candidates for this position. We have decided on two of the best to work together under Chief Seymore to move our administration’s vision of public safety forward.

This is one of the most important appointments to my team. We were fortunate to find him within our department. We have goals to achieve. And we have the right people in place to bring us to higher ground and deliver the unparalleled service I have promised and that you deserve. We are truly better together, Elkhart.”

Kris Seymore, a 22-year veteran of EPD, most recently assigned as the Field Supervisor (Lieutenant) for the Elkhart County Homicide Unit since 2016. Prior to that, he was the Assistant Chief of Police and Detective Captain. Kris has worked in numerous capacities in his career, including Homicide, Juvenile Investigations, Arson Investigations, Anti-Crime Unit, Special Response Team and Uniform patrol. He is a 1993 graduate of Jimtown High School, where he participated in football, basketball and track. He attended Valparaiso University and finished his Associate’s Degree in Criminal Justice at Eastern Gateway College. He is currently finishing up his Bachelor’s Degree in Business Administration at Bethel University. He served in the US Army as an Army Ranger and was Honorably Discharged. He is married with 3 children, and also serves on the Baugo Community School Board and Elkhart County Child Fatality Review Board. He volunteers on the Production team at Premier Arts and enjoys golf and refurbishing antique furniture in his spare time.

Chris Snyder is a 22-year veteran of the Elkhart Police Department. During his career he has work as a patrol officer, patrol supervisor, community police officer, canine handler, public information officer, homicide detective and most recently the chief of police. Throughout his career Chris has been dedicated to working with the department and community to bring them closer together. Chris has been married to his wife for 19 years and has 3 adult children. Outside of work Chris can be found spending time with family or on the golf course.