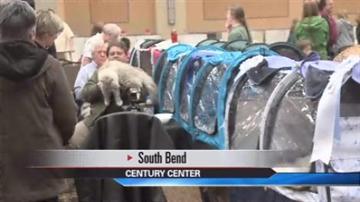 SOUTH BEND — The Michiana Cat Show and International Cat Agility Tournament is at the Century Center the second weekend of April.

Cats of all different breeds competed in six divisions for awards and titles Saturday.

Purebreds jumped through hoops and weaved through obstacles in the agility competition.

"You can actually watch all of the cats being judged in which case you'll see a lot of different breeds you've probably never seen. There's also what we call the iCat which is the agility ring which the cats will run through—some of the cats. Mine won't," said Cori Cherok, show manager.

They also have a pet photographer inside.