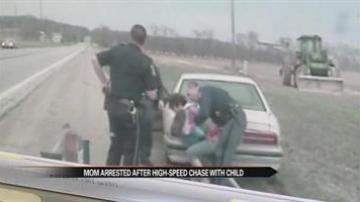 ST. JOSEPH COUNTY, Mich. -- The woman who led police on a high speed chase while her daughter sat on her lap faces seven felonies, including endangering her child. The chase was caught on a police cruiser's dash cam Sunday.

Aubrey Coy led police on a chase that ended when she got out of her car and tried to run with her 5-year-old in her arms.

Police handcuffed Coy while she squeezed her daughter tightly between her legs.

"You don't expect a parent to take a child and purposefully put them in that kind of danger," said Detective Sergeant Todd Petersen of the Michigan State Police.

Petersen says it started with a supervised visit in Kosciusko County.

"Her mother, who was the supervisor down there for the visit, was concerned about her well being and whether or not she was going to injure the child," said Petersen.

Police say Coy's mother went to the restroom and within a few seconds, Coy took her mother's car, strapped her daughter in and drove to Michigan.

Police say they found Coy on US12 in White Pigeon by pinging her cell phone.

A Michigan State Trooper pulled her over.

The trooper attempted to pull her keys out of the ignition, but she drove away.

"She stated, 'You aren't taking my child.' And attempted to drive away, which began the pursuit. The trooper followed," said Petersen.

"She was using her middle finger out the window to the trooper and then pulled the child from the car seat and put her in her lap during that pursuit," said Petersen.

The chase ended without any injuries

"Eventually stop sticks were deployed by the Constantine Police Department which took out two of her tires," said Petersen.

Police say she was going about 75-miles an hour when she was finally stopped.