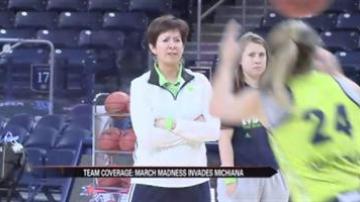 SOUTH BEND, Ind. -- Notre Dame opens up the third round of the NCAA Tournament Saturday against 5th seeded Oklahoma State. It’s a game that’s already sold out. And if you haven’t noticed, Notre Dame’s undefeated hasn’t lost a game since last year’s Final Four. While both teams have a lot at stake and don’t want to lose, Notre Dame’s team is the only one with playoff experience, three of the last four years they’ve made it to at least the Final Four. But Oklahoma State has the powerful cinderella card and the underdog Cowgirls plan on taking their shot seriously. Tip off is just hours away. Notre Dame’s 2nd ranked women’s basketball team will take on the Oklahoma State Cowgirls. The Fighting Irish looked good during Friday’s practice and are feeling confident going into Saturday’s game. “We rise to the challenge when we need to I think we take a lot of pride in being the best,” said Senior Guard Kayla McBride. Seniors Natalie Achonwa and Kayla Mcbride said they’re excited to play at home but they couldn’t bare to lose on their own court. “I know we don’t wanna go out especially not at home. So that adds that motivation,” said Forward Natalie Achonwa. Oklahoma State has two strengths the Irish will need to watch out for— good defense and a lot of rebounds. And to top it off the cowgirls have a good player in Tiffany Bias. She is a senior that reminds many of Skylar Diggins. “She’s a really difficult matchup for us,” Notre Dame Women’s Basketball Head Coach Muffet McGraw. But not so fast. The big news out of tonight’s presser—Bias might not even be playing. “It would be a blow to us and a big challenge,” said Oklahoma State Head Coach Jim Littell. She went down with a twisted ankle in a match up against Purdue and despite practicing with the team this afternoon coaches aren’t sure if she will play tomorrow. It will be a game time decision that could decide Notre Dame’s season.