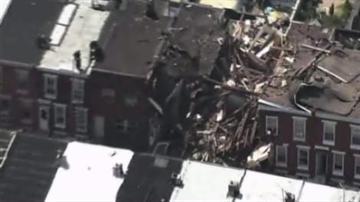 PHILADELPHIA -- At least eight people are in the hospital Monday following a row home collapse in Philadelphia.

Officials say a contractor was working in a vacant home when it caved in Monday morning.

Neighbors on that street reportedly smelled gas and heard an explosion before the home collapsed.

A witness said he saw people inside throw a baby out the window to firefighters because the infant was on fire.

All that is left of that home is a pile of rubble. Two adjacent homes were also badly damaged.

Police closed off several blocks on that street while they assessed the situation.