Residents unhappy with maintenance of cemeteries in Elkhart 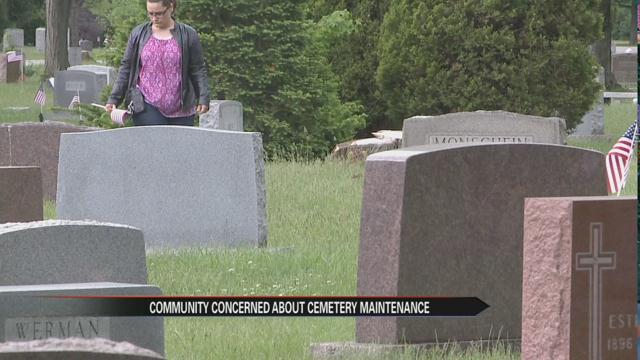 Families in Elkhart say they cannot visit their loved ones at a local cemetery without becoming upset at the conditions. Others are questioning where their tax dollars are going if the city owned cemeteries are not being kept up.

“This is all I have left of them and this is what I come out here to,” says Debra Lowe, of Elkhart.

Conditions like unruly lawns, overflowing trash bins and broken headstones bring family members like Lowe to tears. Others like Amanda Stahl are angry calling this a disservice to local families.

“We paid for them to be buried here and it's a disgrace because it's not being taken care of like it should be,” says Stahl.

Darlene Macumber of Elkhart says she began to notice the unkempt cemeteries in Elkhart over a year ago. Proof of long term neglect can be found in grown over gravestones and headstones sinking into the soil.

“There is no excuse for this when I am paying good taxes in this town to have this kept up. This is a city service that needs to be kept up,” says Macumber.

Council member Brian Dickerson agrees that someone needs to be held accountable for the state of the cemeteries.

“Money has been appropriated but the job is not getting done. In this particular case the department head needs to be held accountable I think he should come forth the council and tell us why the job isn't getting done,” says Dickerson.

There is a team of four who work on Elkhart Cemetery maintenance. They finished cutting grass at Rice Cemetery on Tuesday evening. There are just under 1,000 veterans buried at the three city cemeteries Rice, Grace Lawn, and Prairie Street.

Mayor Dick Moore says the sites will be ready for the holiday weekend.

“We have three large cemeteries we have one small crew that takes care of them so we are doing the very best that we can but we will have them done for memorial day,” says Mayor Moore.

In response to a promise of a picturesque Memorial Day, citizens are saying one day is not enough.

The issue of unkempt cemeteries in Elkhart was brought up at Monday's Common Council Meeting.

Councilman Dickerson says crews not taking care of  city landscaping is a city wide issue, and it is a problem he is going to keep a close eye on after receiving a good amount of public concern.
Share this article: