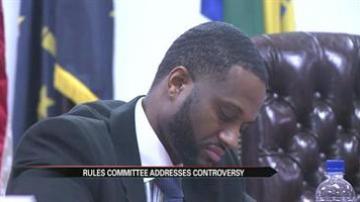 SOUTH BEND -- South Bend residents are waiting to hear what will happen to Common Council Member Henry Davis Jr. who posted a controversial photo to his Facebook page earlier this year.

The common council rules committee met Friday afternoon to hear from the council attorney on the status of the investigation.

Davis posted an article, and with it a photo of a man engaging in inappropriate activity with a dog.

“He posted it somewhere, where everyone could see it. And people say that’s freedom of speech, well we do have freedom of speech in this country. But you can’t scream fire in a crowded theater either,” said resident Becky Kaiser.

Council attorney Kathleen Farrand led the discussion and shared a 128 page report of her investigation into the Facebook post with council members.

“Based on the information that I have at this point, there was no willful or malicious conduct involved,” Farrand said.

But the council attorney did have concerns.

“Nowhere in our rules and regulations did we have any regulations giving guidance to you the council as to how do you separate your public page from your private page,” Farrand said.

In fact, she said there are very few rules regarding as to how council members should behave on social media.

That makes Kaiser believe Davis will not be penalized for his post.

“At this point I don’t have any hopes or wishes or anything like that. It’s obvious that there’s not going to be a lot done," said Kaiser.

The common council has planned to meet sometime the first week of April to decide what action, if any, they will take against Davis.