Safety gates to be installed at 'Ryans Crossing' 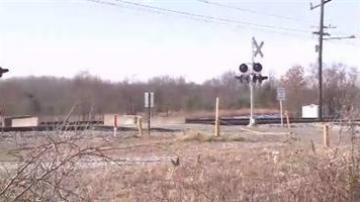 ST. JOSEPH, Ind. -- It has been a little more than two months since a South Bend man died in a tragic collision with a South Shore train. Now, county and state officials are stepping in to add gates to the railroad crossing where Ryan Voreis' life came to an end.

Ryan’s family and friends have been working since the accident on Oct. 7 to get something done to make the railroad tracks more safe.

Matt Deitchley, a spokesperson with (INDOT) the Indiana Department of Transportation told ABC 57 News on Thursday that the state was actually in the process of getting crossing arms at the Pine Road South Shore tracks before Ryan's death.

But the recent push for "Ryan's crossing" may have helped as well.

"He just wouldn't want anything to happen to anybody else,” said Richard Voreis, Ryan’s father.

He said that’s how Ryan would feel about the train tracks.

"Ryan was my buddy; we did everything together, he was always there for you no matter what time you called he would be there,” said Richard.

Ever since his death, Ryan's friends and family have rallied to get crossing gates put up.

"We had a petition signed with more than 2000 people, we've made three types of decals, bumper stickers; it's something we are doing to support Ryan," said Ryan’s friend Emily Bragg.

They think as Ryan was waiting for another train to pass on a parallel set of tracks, he simply wasn't aware a South Shore train was headed straight for his vehicle.

A spokesperson with the St. Joseph County Police Department said toxicology and blood work show Ryan had no alcohol or drugs in his system the night the tragedy occurred.

"We lost a good friend-just because there wasn't a gate up there,” said Justin Ginter, Ryan’s friend.

INDOT took the first steps in getting gates installed yesterday when representatives met with the (MACOG) Michiana Area Council of Government and the initiative passed.

“Pretty grateful about this and pretty surprised that the government has moved this fast, because what I heard is it usually takes a longer than this-- but less than two months is pretty good,” said Richard.

"This is incredible! We never expected this and we thought it was going to take years, so we planned for that” said Bragg.

Deitchley says there isn't a timetable for the gates yet - but the next step is for INDOT to allocate $450,000 from the federal government that is needed for the project to move forward. Then once the funding is secure he said the design phase can begin.