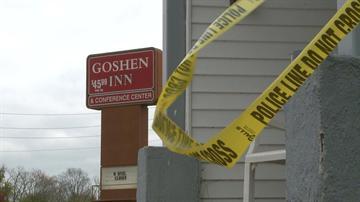 GOSHEN, Ind. – There were grim looks on the faces of the men who live on work at the former Goshen Inn on Lincolnway West Friday morning.  On Thursday, the body of 51-year-old Ken Patel, owner of the inn, was found inside one of the rooms.  Thursday had started just like any other day for Patel’s tenants and employees.

“Up until about 9:30 and then from 9:30 on there was people coming in looking for him,” explained Joe Pearcy, who worked for Patel for the past three-months.  “Nobody could figure out where he went and that wasn’t like Ken.”

Patel’s son came to the inn looking for his father.  The employees had assumed that Patel had left because his car was gone.  But, when nobody heard from him, his son called police.  Eventually police decided to search the inn room-by-room.  It wasn’t long before they found him locked in one of the rooms with multiple blunt-force injuries to his head, he was pronounced dead at the scene.

“His son was here when they found him and he was on the phone with his mother, which was Ken’s wife,” Joe Pearcy explained.  “I’ll never forget the sound of her on the phone and the look on his face.”

Pearcy and other employees had been working and moving through the hallways outside the room for most of the day, not knowing that Patel was inside.

“The only consolation I got out of this was when the officer told me last night that if we’d have found him, even early enough, it probably wouldn’t have done any good,” he described.

Patel had been found inside the room of one of his employees, John Hawley of Kokomo.  Police in Kokomo arrested Hawley and he was booked into the Elkhart County Jail on murder and robbery charges.

“He was pretty quiet, he kidded around, he was a hard worker,” Joe Pearcy described Hawley.  “He’d sit every night, go to his room, drink his beer and not bother too many people.”

Patel’s murder is the second homicide in Goshen in the past two weeks, the other being the brutal killing of Goshen College Professor James Miller.

“We’re still the same Goshen that we were three-weeks ago,” affirmed Goshen Mayor Allan Kauffman.

“I don’t think we’ve ever had a situation where we’ve had this many things packed this close together and it’s just really odd,” Kauffman explained.  “I honestly believe it is coincidence and has nothing to do with the safety of the community.”

Kauffman once again stated his believe that most of these crimes are being committed by people from outside Goshen.  He also explained that police are doing everything they can.

“The police department’s pretty frustrated because it’s one of those ‘when it rains it pours’ kind of things,” he explained.  “There’s no doubt there’s added strain.”

But, the level of crime isn’t what mattered to Ken Patel’s former employees and friends.

“He was a blessing in my life, he came into my life when I needed it, gave me a place to live, gave me a job and I did the best I could for him,” Joe Pearcy described.

Pearcy is an ex-con and like many of Patel’s employees he was given a second chance when he came to work at the Goshen Inn.

“I lived in Kokomo at the rescue mission for a year and Ken helped out at least five guys from there,” he explained.  “The ones that were willing to work and worked good for him, he did what he could for us.”

Pearcy and other employees described Patel as a hard worker, good-hearted and fun-loving.

“Matter of fact, when I got my job, the requirement was one thing, I had to arm wrestle him and if I beat I could work for him,” Pearcy described.

Now, Pearcy explained he is going back to Kokomo.  He and Patel’s other employees have lost their jobs, home and a good friend.

“I’m hoping that I can still help maybe complete Ken’s dream, to get this place back open, I don’t know what’s going to happen now,” he explained.  “But, I won’t forget him, be good things the rest of my life to think about him.”

Patel owned other hotels in Kokomo and Anderson, his wife operates another hotel in Goshen.  The murder case has been handed over to the Elkhart County Prosecutor’s office.