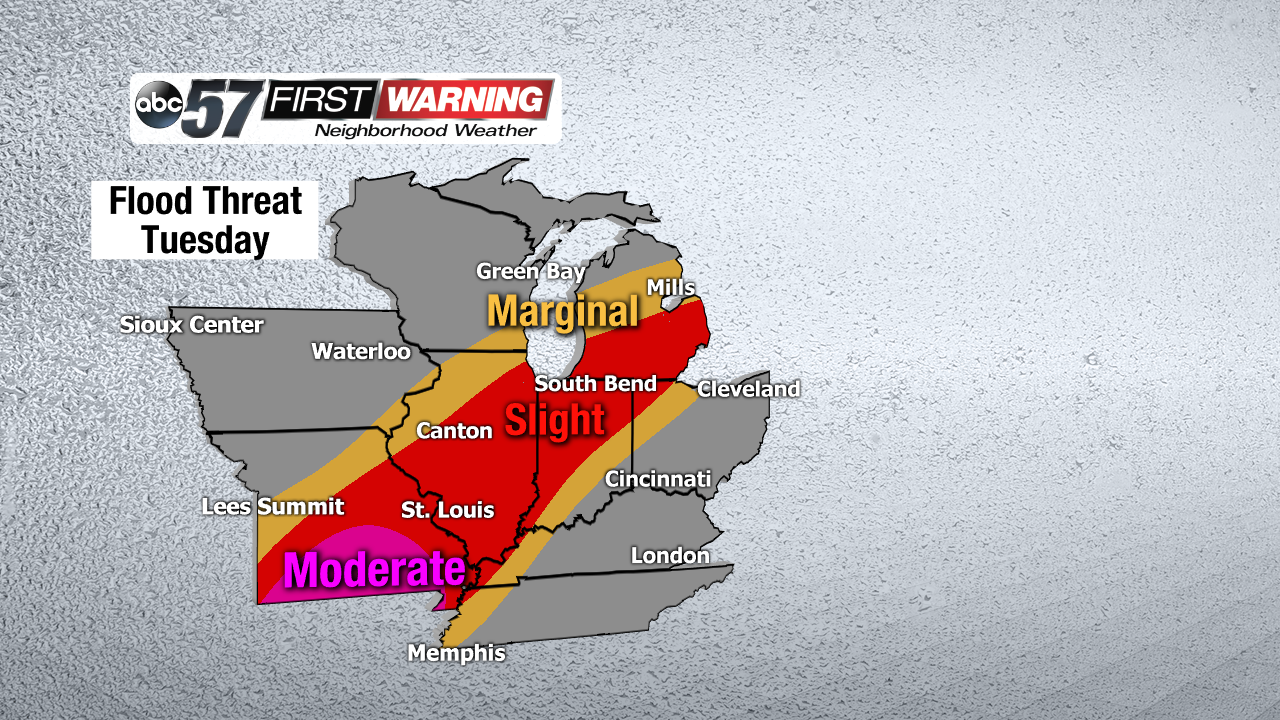 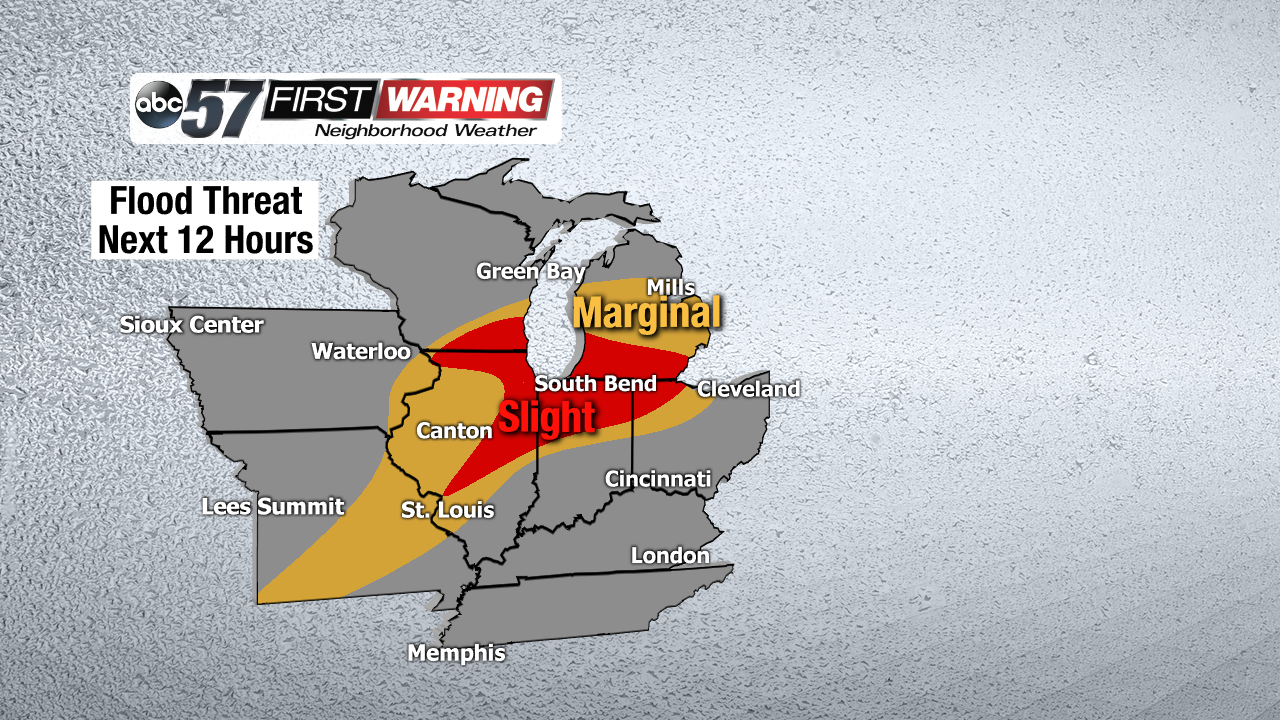 Rain, rain go away. That will likely be a phrase used by all this week. Steady rain will fall at a moderate to heavy clip Monday night, Tuesday and Tuesday night. A few thunderstorms could be embedded within the rain as well, which will lead to localized very heavy rain at times. As a result of the heavy rain, the Weather Prediction Center has placed the entire region in a Slight Risk for flash flooding Monday night. There is also a Slight risk for flash flooding on Tuesday due to the excessive rainfall in the forecast. The flood threat isn't confined to Michiana, however. Heavy rain and flooding are in the forecast from Texas to Michigan as multiple disturbances ride along a stalled out boundary. Millions of people from Dallas to Little Rock and St. Louis could see significant flooding along rivers and streams over the next several days as rivers begin to crest. 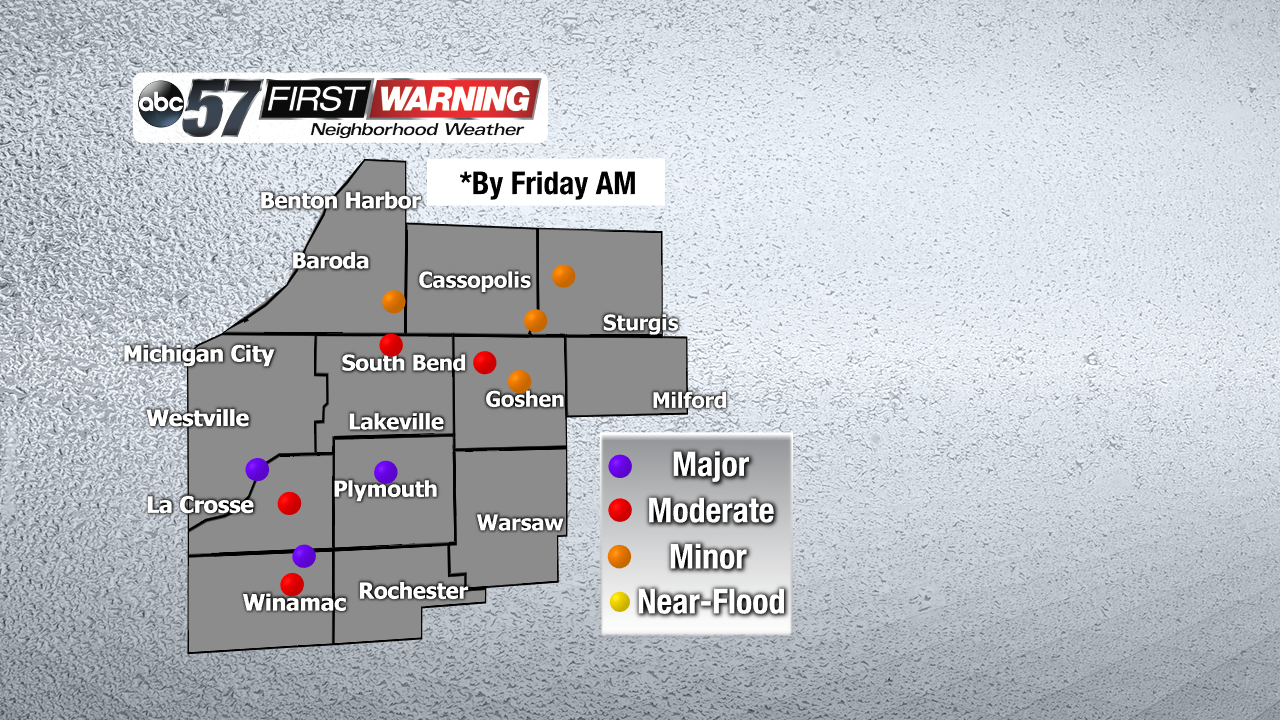 That includes multiple rivers in Michiana. Every dot on the flooding map indicates a river expected to reach at least minor flood stage by Friday morning. For the most part, the dots are different locations along the same river. For example, there are multiple locations along the St. Joseph River expected to see flooding from Niles to South Bend and Elkhart. There are even three locations that are forecast to see what the National Weather Service calls "Major Flooding." That includes the Yellow River at Plymouth, the Yellow River at Davis and the Tippecanoe River at Ora. 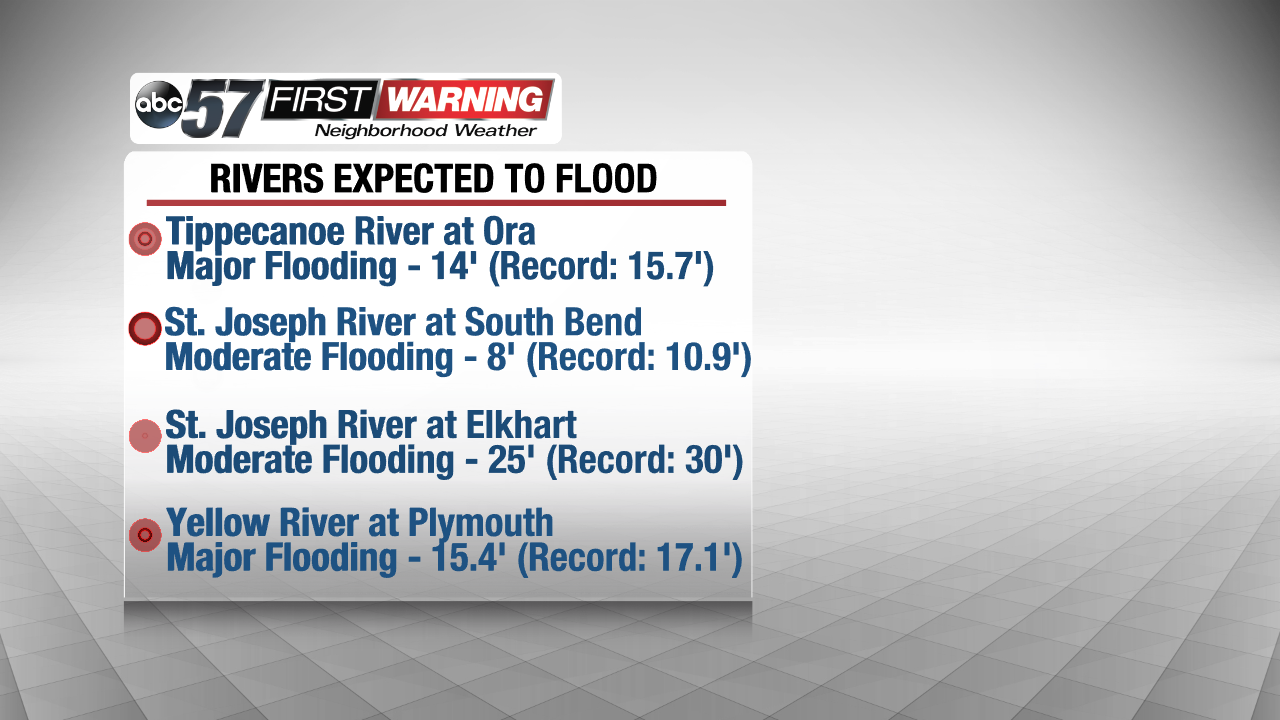 It's important to remember that just because a river is expected to reach "Major Flood Stage" at a specific point does not mean the entire river will be seeing major flooding. However, with moderate and major flooding, there will be significant water rises to near record levels in spots. This will cause flood-prone areas, low-lying areas and roads that run along Michiana rivers to flood in all likelihood.

For the Yellow River in Plymouth, this includes much of the city. Residential areas and high school property will flood. Water from 1 to 3 feet deep could affect southern and eastern portions of the city. Flooding is expected to occur along Laporte and Garro Streets, in addition to the trailer park near the Jefferson Street Bridge.

For the St. Joseph River in South Bend, North Shore Drive, Northside Boulevard and Riverside Drive could experience flooding. Parks and lowlands along the river are expected to see water rises, and some basement flooding is possible.

For Elkhart, Niles, Mottville, and Three Rivers expect rising water and instances of flooding along the St. Joseph River. The Tippecanoe River in Winamac and Ora is also expected to rise significantly to Major Flood Stage. This will lead to lowland, farmland and some residential flooding.

All of the rivers, streams and creeks in Michiana are expected to crest Friday morning and afternoon. Some of the rivers will reach top-10 levels, but fall just short of record levels.