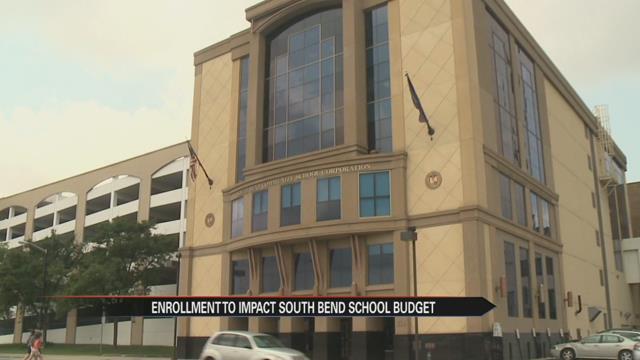 The South Bend Community School Corporation is expecting a drop in enrollment this fall as neighboring school corporations look to start pulling students out of that district.

The district estimated a loss of about 300 students in the fall when preparing the upcoming budget.

And while Superintendent Carole Schmidt says the corporation offers significantly more programs than neighboring schools, members of the school board think the district needs to be more aggressive in marketing those programs.

“Any other neighboring schools, they couldn't even come close to what South Bend offers,” said William Sniadecki, SBCSC board member.

Despite growing programs, South Bend Community School Corporation could see fewer students in the fall, which might be good news for neighboring schools.

“There are some districts who are choosing to go into other districts and pick up their students,” said Superintendent Schmidt.

Several districts including Mishawaka plan to bus students from South Bend to schools in their communities.

"Outside our district people don't know what South Bend has to offer,” said Sniadecki.

So Sniadecki wants to push back.

“We should do the same thing," he said.

His grandchildren attend Tarkington Traditional School on the city's northeast side, so he wants the district to increase its recruiting efforts.

Superintendent Schmidt says they're working on it.

“We've got two years of commercials for TV, for radio, for social media, and so it's pretty comprehensive," she said.

Sniadecki says more could be done.

“We need to start earlier, we can't wait until the end of the summer or after school starts,” he said.

Fewer students could mean less funding for the district as well.

The corporation did not benefit from the federal Foundation Grant.

It added about two percent more spending for schools based on competitive enrollment.

With the district expecting about 300 fewer students come fall, they won't see much of it.

The state decreased funding for an income-based grant called the Complexity Index to increase the Foundation Grant, hurting urban districts like South Bend in 2016.

“In our case, it reduced our budget because it changed the formula with the Complexity Index and took some of those dollars away," said Superintendent Schmidt. "So despite the fact that they increased a little bit in the Foundation Grant, because there was a decrease in the Complexity Index that didn't equate to the increase that other districts received.”

Superintendent Schmidt says the district will be fine for the remainder of 2015.

It will have to prepare a new budget affected by these changes in January.