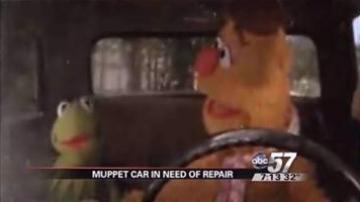 SOUTH BEND, Ind. -- A piece of Muppet history is sitting in South Bend, in need of a helping hand.

The Muppets have recently returned to the silver screen, but an important piece of their first movie is sitting at the Studebaker Museum.

The Museum is hoping for a little help to get it back into shape.

Fozzie Bear and Kermit the Frog hit the road in the original Muppet Movie in a quest to make it to Hollywood.

Their road trip took place in a 1951 Bullet Nose Commander, made by Studebaker.

According to Fozzie, his uncle let him borrow the car for an adventure that took the Muppets across the United States.

It even landed the car a new paint job along the way.

Once the movie faded from the limelight, Fozzie's famous Studebaker sat on a backlot for awhile until it made its way to the Studebaker Museum in South Bend, Ind.

Jo McCoy with the Studebaker Museum said it is still equipped with a little Hollywood magic.

"You can see where they set the steering up from the back, so visually it looked like Fozzie Bear was driving and then the puppeteer back here drove the vehicle  and had a video camera that was in the bullet nose to see where it was going," said McCoy.

Much of its Hollywood shine has worn off, and the museum is trying to raise money. $40,000 is need to restore the car.

McCoy also said that the car is one of South Bend's best kept secrets and they are a  long way off from getting it back to its heyday.

For now, the museum is going to just keep moving right along, hoping the new movie will bring this old car some much-needed attention.

There were actually two Studebakers used in the film. The modified one and the one that actually ran normally was used for the wide-open road shots.

Check out this YouTube clip where the car was seen in the movie.