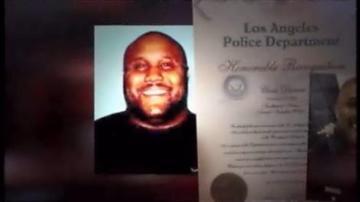 BIG BEAR, Calif. — After a week on the run, the manhunt for accused killer Christopher Dorner took another deadly turn Tuesday.

Authorities said Dorner held two women hostage in their home. One of the hostages was able to untie herself and call 911.

When deputies caught up to the suspect, he abandoned a stolen car and took off on foot, leading to a deadly shootout.

After the shootout, the suspect barricaded himself inside a cabin.

Flames engulfed the place and burned through the night.

The LAPD said Wednesday morning that a body found in the cabin is believed to be Dorner. But they are waiting to use forensic testing to positively identify the remains.