The Fighting Irish gear up for the Pinstripe Bowl 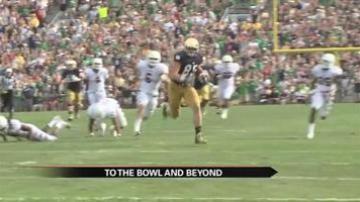 SOUTH BEND, Ind.--- The Notre Dame football team will be spending the holidays in New York City as they prepare for the Pinstripe Bowl at Yankee Stadium.

Junior Conor Hanratty says a lot of the younger players have been standing out in practice.

Hanratty said, “A lot of guys have really stepped up. You see Isaac playing more and Jarron Jones is having a huge role now. And at the end of the season with a lot of injuries it’s really important that they step up in that way.”

For the younger players like Jarron Jones, the bowl game against Rutgers gives them the opportunity to step up and play a more prominent role.

Jones said, “They got a pretty big offensive line so we need to worry about how to handle them.”

Irish Head Coach Brian Kelly says Rutger’s offense is similar to how Pittsburgh plays, and he is fully confident in Jones' ability at nose guard.

Kelly said, “We’re going to get a lot of movement from Rutgers. That front is going to move a lot. So they are going to have to pick up games and stuff up front so that’s what we are spending more time with those guys on.”

Kickoff is at 12pm on December 26th at Yankee Stadium.
Share this article: