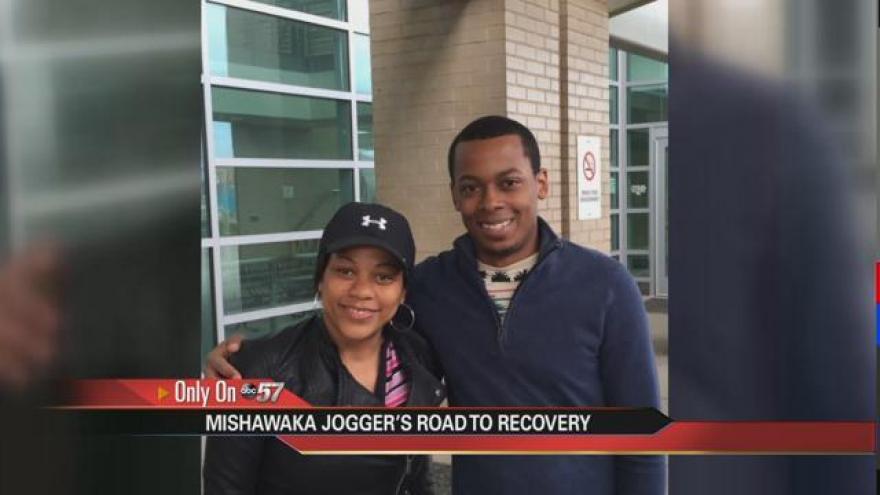 MISHAWAKA, Ind. - On May 29, 2014, Tiffany Brantley was jogging in Mishawaka when she was struck and nearly killed by a drunk driver. Nearly one year later, Tiffany shares her journey of recovery and forgiveness.

That morning, Tiffany's day started out like many others.

“I just remember waking up kind of in a rush because I wanted to go to the gym and get a really good workout in,” said Tiffany.

Her grandfather had died just two days before, so she says she had a lot on her mind when she took off down Jefferson Boulevard.

“They said it wasn't even a half a block that I made before it happened,” said Tiffany.

We went with Tiffany to spot where the accident happened. It was the first time she has been to that spot.

“It's kind of like butterflies are in my stomach,” said Tiffany.

The driver who hit her, Quentin Burnley, was driving fast down Jefferson when he crossed the center line and struck Tiffany.

He spent three months in jail for the crime.
Tiffany says she doesn't remember much of what happened until she woke up in the hospital.

“I've had no doubt in my mind. I'm just a fighter, I'm not a quitter, I'm a fighter and so when I woke up and they told me what happened, yeah it was bad, it was horrible, but in my mind I thought oh, I'll get through this,” said Tiffany.

The accident crushed her pelvis, a few vertebrae and broke her tibia and femur in her left leg.

She was unable to walk until September 2014.

“They said the point of impact was right there and then now since I've been exercising it's come around but it's very tender and hurts still,” said Tiffany.

She says part of that journey was tested when she recently bumped into with the man who almost took her life.

“I approached him and I took off my glasses and I said,' Hi Mr. Burnley, how are you doing?'” Tiffany said.

She says Burnley's first concern was for her.

“He was speechless and he had tears in his eyes and said, ‘How are you?'” said Tiffany.

After briefly catching up, Tiffany did something that might shock anyone else standing in her shoes.

“I said, ‘I wish you the best of luck and keep up the good work.' And I gave him a hug,” said Tiffany.

That hug – a mark of forgiveness – a final stage in the healing process and one she hopes will make an impact for years to come.

Tiffany said she hopes to give back to the community by sharing her story of recovery. She hopes by telling her story she can prevent someone else from getting behind the wheel after drinking.

Tiffany plans to walk around Battel Park at 10 a.m. on Saturday, May 30 to celebrate her recovery. She says everyone is welcome to join her.