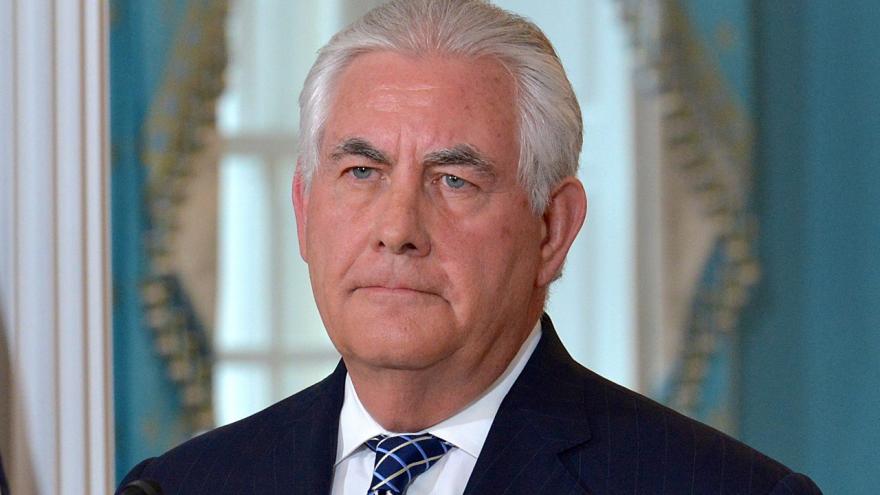 By Elise Labott and Tamara Qiblawi

(CNN) -- Secretary of State Rex Tillerson on Sunday encouraged Qatar and the Arab countries boycotting it to meet and resolve a diplomatic row that has put its Gulf allies at odds.

The request comes two days after the boycotting countries delivered a list of 13 demands to Doha and told the government it has 10 days to comply in order to restore ties with its neighbors.

"Qatar has begun its careful review and consideration of a series of requests presented by Bahrain, Egypt, Saudi Arabia and UAE," said Tillerson. "While some of the elements will be very difficult for Qatar to meet, there are significant areas which provide a basis for ongoing dialogue leading to resolution."

The Arab countries cut ties with Qatar on June 5, accusing the Gulf state of supporting terrorism and destabilizing the region. Qatar, which shares its only land border with Saudi Arabia, has rejected the accusations, calling them "unjustified" and "baseless."

Bahrain, Yemen and the Maldives have also said they are indefinitely severing ties with Qatar.

Among the demands, the countries want Qatar to shut down its state-funded Al Jazeera news network, cut ties to extremist groups, halt the development of a Turkish military base in the country and weaken diplomatic ties with Iran, which they fear is increasing its sphere of influence in the region.

Tillerson added: "A productive next step would be for each of the countries to sit together and continue this conversation. We believe our allies and partners are stronger when they are working together towards one goal, which we all agree is stopping terrorism and countering extremism.

"Each country involved has something to contribute to that effort. A lowering of rhetoric would also help ease the tension. The United States will continue to stay in close contact with all parties and will continue to support the mediation efforts of the Emir of Kuwait."

Qatar confirmed Friday it had received the list and was studying the demands. The Ministry of Foreign Affairs said it would give its official response to Kuwait, which has been acting as a mediator between Qatar and its neighbors.

The director of Qatar's Government Communication Office, Sheikh Saif bin Ahmed Al-Thani, said the demands confirm what Qatar has said from the beginning.

"The illegal siege has nothing to do with combating terrorism, (but) it is about limiting Qatar's sovereignty, and outsourcing our foreign policy," he said.

The story raised concerns about the closure of Al Jazeera, citizenship rights and extraditions.

"NHRC noted that Qatar's acceptance of these demands and conditions would subject the country to international accountability and violate its obligations on human rights conventions. In this context NHRC urged the state of Qatar not to accept those demands," the article said.

Al Jazeera said any call to close down the network is an attempt to silence freedom of expression in the region.

"We assert our right to practice our journalism professionally without bowing to pressure from any government or authority and we demand that governments respect the freedom of media to allow journalists to continue to do their jobs free of intimidation, threats and fear-mongering," the network said in a statement.

Qatari citizens were expelled from Saudi Arabia, Bahrain and the UAE, which also banned their own citizens from entering Qatar.

Al-Thani reportedly hailed Iran as an "Islamic power" and criticized US President Donald Trump's policy towards Tehran on a news website. Qatar said the website was hacked.

"We view cooperation with the Qatari government as continuous cooperation and believe that there are very good opportunities to further deepen relations between the two countries and these opportunities must be exploited," Rouhani said, according to statement on his website.

The US maintains its largest concentration of military personnel in the Middle East at Qatar's Al Udeid Air Base.