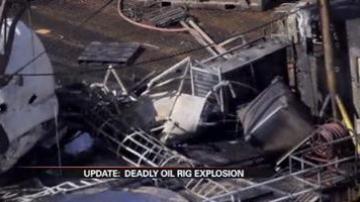 New information Monday night on the oil platform explosion in the Gulf of Mexico.

The blast happened Friday morning about 20 miles off the Coast of Louisiana.

At least two workers were killed and 11 others hurt. Four crew members suffered severe burns and were rushed to the hospital.

"The first two patients remain in critical condition. The third is in serious condition, and I'm pleased to share the fourth patient has just demonstrated significant progress and is now in fair condition," said Doctor Jeffrey Littleton, Baton Rough General.

The Coast Guard said about 28 gallons of fuel spilled into the water.