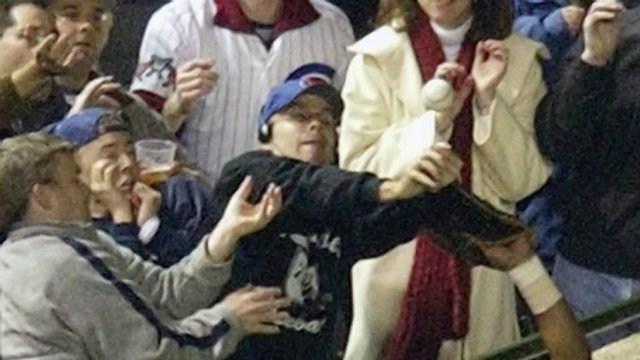 (CNN) -- Chicago Cubs diehard Steve Bartman, who came to symbolize the team's crushing defeat in the 2003 National League Championship Series, will be glued to the TV Saturday night.

"No doubt that he will be watching," Frank Murtha, a longtime friend and spokesman for Bartman, told CNN.

The Cubs face Los Angeles Dodgers ace Clayton Kershaw as part of their quest for their first Major League Baseball championship in 108 years. They lead the seven-game National League Championship Series 3-2. If they win, the team will head to Cleveland to battle the Indians in the World Series.

Thirteen year ago, Bartman sat in Wrigley Field's stands in a green turtleneck and headphones over his Cubs cap during Game 6 of the NLCS. The Cubs led that series against the Florida Marlins three games to two.

The Cubs were a mere five outs from the World Series.

Then Bartman, seated down the left field line, reached for a foul ball and tipped it away from the outstretched glove of leaping Cubs outfielder Moises Alou.

His interference was the catalyst for a Marlins rally and eventual series win. TV cameras focused on Bartman, frozen in his seat. He was showered with abuse and had to be escorted from the stands for his own safety.

Few people mention that a critical error on a sure out by Cubs shortstop Alex Gonzalez would have ended the inning.

"What went on that night at the stadium was pretty scary," said Murtha, who speaks occasionally with Bartman.

"It was something like a biblical 'Give us Barabbas and crucify the other guy,' you know? It was mob action fueled by a lot of alcohol, a perfect storm of dysfunctional behavior."

Bartman, who still lives in the Chicago area and works for a financial firm, all but vanished. He still receives threats, according to Murtha.

"Steve just wishes the Cubs well and has no interest in being any distraction from whatever happens to them," said Murtha.

"He is such a grounded, well centered person that he doesn't need the affirmation. He doesn't seek forgiveness. None is probably needed."

So don't expect to see a man some consider the most infamous fan in the history of baseball at the World Series. If the Cubs get there. Finally.

"The likelihood that he would return to throw out a first ball or anything like that is probably slim, none and no chance," said Murtha.

"Steve's goal in all this has been to return to a normal life and the fact that we're still talking about it 13 years after the fact is nothing short of bizarre."

Bartman has turned down financial opportunities, according to Murtha. There were book proposals and a six-figure offer for a commercial.

A hotel company offered a six-week Florida vacation. Instead, Murtha said Bartman asked the company for gift certificates, which he donated to charity.

"Somebody had some idea about a Broadway play, which I thought at first was a joke," said Murtha, a sports agent and former prosecutor.

"Is this Spring time for Hitler or what?"

Murtha said Bartman is single. He won't say whether Bartman has been back to Wrigley in the last 13 years.

"He is classy and has risen above this," said Murtha. "The character that he has and the kind of person that he is reflects well on him."